A theatrical adaptation based on the humorous stories of Chelem and Eastern European Jewish folklore. Leimech and Laizer set out on an adventure to find a new moon for the town of Chelem to replace the one that was stolen.

The plot unfolds via a pop-up book, combined with puppets and shadows and incorporating original klezmer...

Galia Levy Grad has created a world of magic and beauty using the simplest, most minimalist techniques: the entire drama materializes out of a pop-up picture book. The visibility of the theatrical mechanism to the audience only serves to enhance the magic and liveliness of the two-dimensional figures. Galia has created exhilarating theatrical moments by means of inventive, aesthetic and highly imaginative elements.

A brilliant adaptation of the Chelm stories for paper theater, created jointly by Naomi Yoeli and Galia Levy Grad. (The latter is also the narrator and manipulates the characters, engaging in lively dialogue with them.) It’s impossible not to fall in love with Levy Grad, who brings to life the townspeople made of beautifully decorated papercuts; they appear, in fact, from an old book of tales, like pop-up postcards. The show reminds us of the true magic of theater and is an extraordinary glimpse at some wonderful stories from Jewish culture.
- Merav Yudilovitch, Ynet 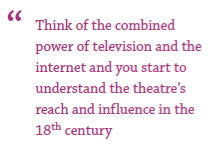 Pantomimes are a mainly British tradition, that has come to be performed almost exclusively in modern times around Christmas.

Being a type of theatre, pantomimes have of course, been adapted to the toy theatre.  The toy theatre versions originally came out during the Victorian age.  Victorian pantomime inspired today's versions, but were very much of their time.  The history of pantomimes goes back much further, however...

On December 2nd, at the Sala CCB (Performing Arts Center) in Mexico City,  the company Huellas en Venus Teatro premiered a new toy theater show - "About the Secret Life of Cats". It will be performed there until March 2018, and after that they hope to travel it round the country.

Watch the creative process come alive, as the company brings this production to life!

A behind-the-scenes trailer for the new toy theatre production (in Spanish):

From an recent interview of the company: 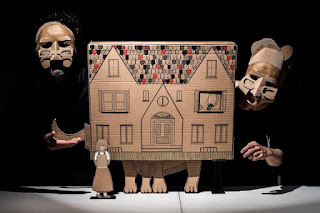 The production, in paper theater format,  written by Gerardo Castillo and directed by Mauricio Martínez Martínez, tells a story that will uncover a legend about relationships between cats and humans.

In this world full of magical and mysterious places, the audience will be able to meet characters like Lorenza, the little kitten of colossal proportions, Timotea, the colorful flying kitty and his loyal friend Rodolfo, the acrobat mouse, and, of course, the daring Sir Thomas Malory Tapioca. 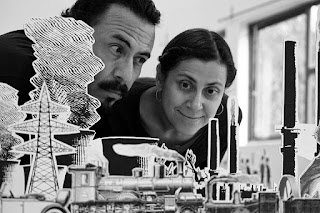 The story arises from the need to explore the thousand-year-old figure of the cat, which has inspired from heroic legends to tales of terror. With a sense of humor, the project is immersed in its amazing stories and vicissitudes, the same that happens on the margin of the daily worries of the human beings.

Miguel Ángel Morales, Mauricio Martínez Martínez and Ana Cordelia Aldama make up the cast of this work that proposes the fusion of paper theater with a contemporary expressiveness, in which the actors use the resource of oral narration, with masks and manipulation of objects.

That sounds amazing!  I hope anyone in Mexico who has the chance, definitely checks out this fantastic production...
No comments:
Email ThisBlogThis!Share to TwitterShare to FacebookShare to Pinterest
Labels: creativity, creators, design, fusion, paper, performance, performers, play, storytelling, toy theatre, toy theatre influence


Wilton's Music Hall has been hosting an exhibition that includes a very special toy theatre.  I will let the artist and creator of this toy theatre - Fann (Peeticha) Kongrit - tell you all about it...

It began when I joined a group called The Storybox Collective. It is a group of ten designers and illustrators who have explored the potential of archival research in order to introduce their audience to a curious world of discovery and serendipity.

Our first group exhibition - ‘Storybox: Tales of Absence, “What ifs” and Salvation’ - was inspired by the archives of London’s celebrated Wilton’s Music Hall and we have interpreted the world of Wilton’s that was, that is and that could be through a series of new artwork.

Archival collections present a vast wealth of opportunity for discovering creative inspiration and surprising revelations. The Wilton’s collection contains hints and clues to not just the history of the building and its environment, but to the many fascinating people who walked the hallways of the world’s oldest grand music hall.

In this project, I took inspiration from The Music Hall building itself. When I saw the holes and faded paint, I realizes that there are memories recorded in the wall. So I wants to turn back in time and bring that former glory back by using the perspective of a little creature living in the wall.

"An 18th-century mechanical theatre was a technology of tricks and devices..." - Read more.

There is a very special place in Oakland, California, where a very special program is performed every October 30th and 31st.  It all started with an idea from the mind of Larry Schmidt...

Below are some highlights from the show - excerpts that demonstrate the sharpness of wit,  skill of puppetry, and comic brilliance - that you'll be sure to enjoy.  First up, Mysterious Mose, followed by, The Skeleton and the Roundabout, and finally, Hanky Pank's T'ain't No Sin! Check them out...

The Rebel Puppeteers of Sudan 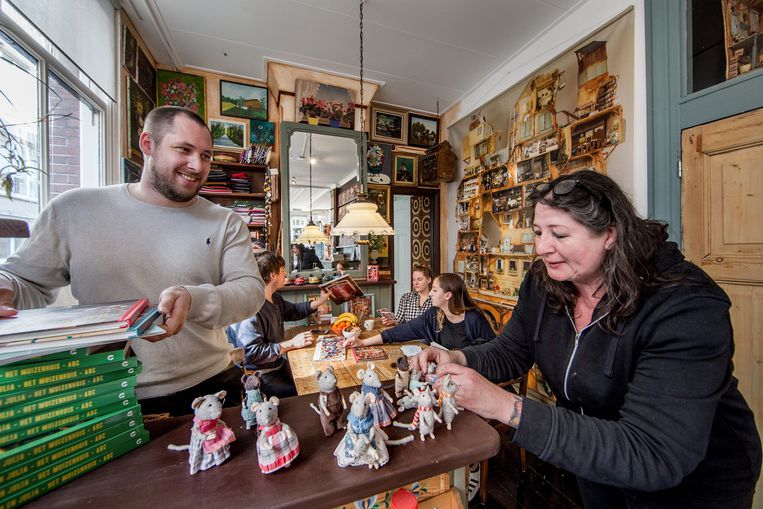 Studio Schaapman is a family business, consisting of Karina Schaapman and her children, Tom, Ian, Manita, and Lili. They are the creators of the children’s book series, Mouse Mansion (translated into 25 languages). 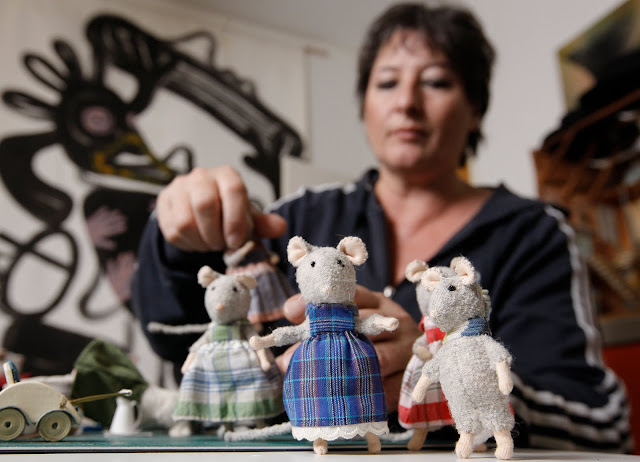 In the books, they use detailed miniature settings they build themselves that can now be admired at their Amsterdam Muizenhuis (or Mousehouse) shop. At the back of the shop is their studio where they create their mouse worlds, and where visitors can look inside. People often ask questions about the inspiration, design, and construction of the mouse mansions. 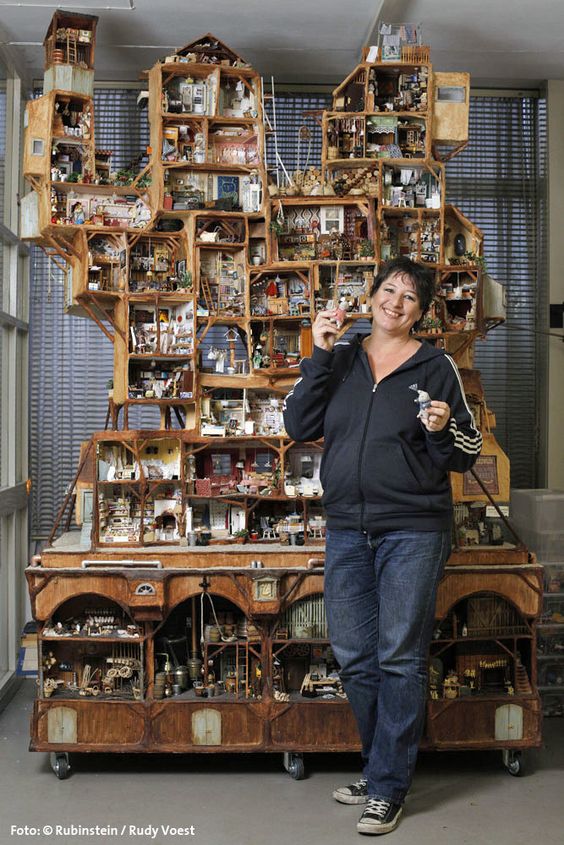 In the Mouse Mansion shop & studio you can: 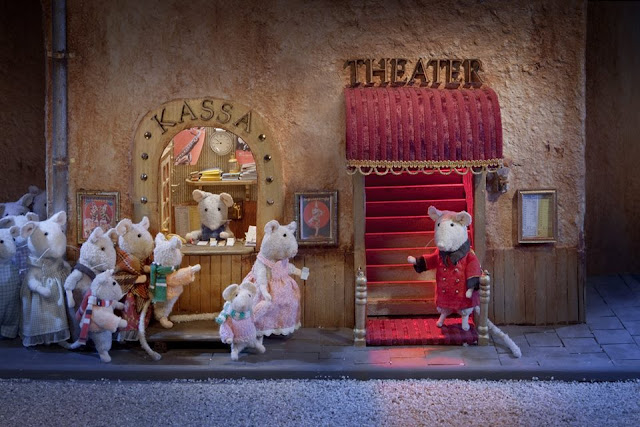 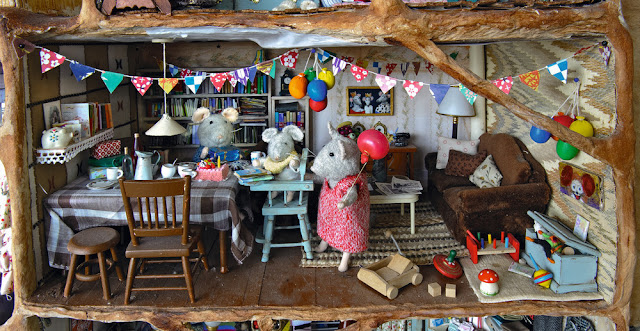 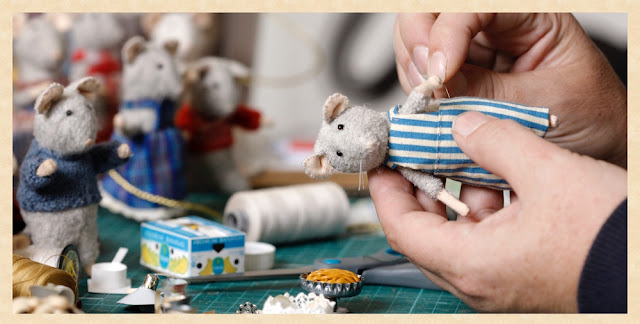 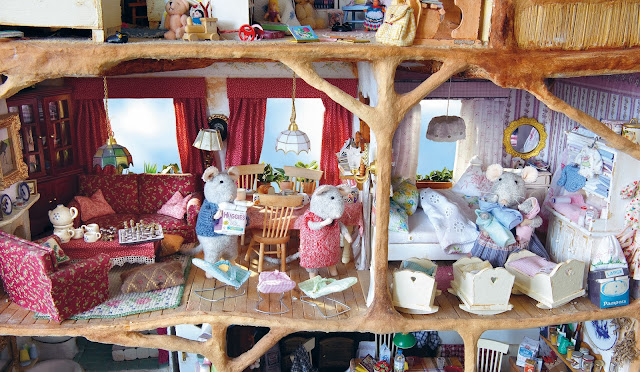 Studio Schaapman even provides video tutorials for those who want to build their own mouse houses!

A few weeks ago I was contacted by email about a Model Theatre that is looking for a good home. The model is described as a Model Cinema/Theatre with revolving stage. Cine films can be shown through the back wall of the Model if required. There is only one theatre with a revolving stage that comes to mind, and that is the London Palladium. Although sadly, the revolve was removed some years ago when the Theatre was bought by the Really Useful Group owned by Andrew Lloyd Webber. I am not sure if this is a scale model of the Palladium itself. The gentleman who made it was a Mr. Sam Witham, from Reading. He was a member of the then, Reading Society of Model and Experimental Engineers. He won First Prize with his Model in 1951.

X-Men Wolverine as a Puppet 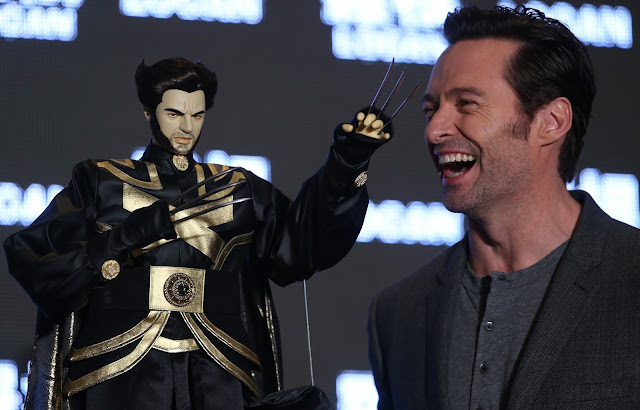 Australian star Hugh Jackman, well-known for his role as Wolverine, was recently in Taiwan to promote the film Logan. At a press conference there, he was given a Taiwanese glove puppet in the likeness of his X-Men character from the film company, 20th Century Fox. Jackman said he will treasure the amazing gift forever, and will have to find a way to keep it away from his children.

A Portrait of the Puppet Master as a Young Man

Barnaby Dixon is a very talented young man, with an innate ability to create both visually (puppets) and orally (character voices), as well as write/ad lib some VERY funny stories for his puppets. Check his videos out to see for yourself...
No comments:
Email ThisBlogThis!Share to TwitterShare to FacebookShare to Pinterest
Labels: construction, creativity, creators, design, makers, performers, puppets
Newer Posts Older Posts Home
Subscribe to: Posts (Atom)