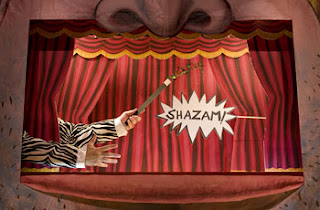 Paul Zaloom is one talented fellow.

One of the things he has talent for is toy theatre.

Unbeknownst to me, I had already seen his work. That was brought to my attention by a recent article where his name was mentioned, that led to me researching him. One thing led to another, as it often does with me, and suddenly I was reading how he had been part of the Dante's Inferno project that used toy theatre in new and innovative ways.

Recently Paul once again used juvenile theatre, when his Toy Theater Puppet Show did an adult-only found-object-animation satire entitled, The Abecedarium. Paul describes it on his website:

The purpose of the show is to create an uproariously funny, visually stunning, politically satirical spectacle that will generate unbridled mirth and awe about the things that are killing us all.

Sounded like a lot of fun to me!
No comments:
Email ThisBlogThis!Share to TwitterShare to FacebookShare to Pinterest
Labels: adult, creativity, design, performance, performers, toy theatre 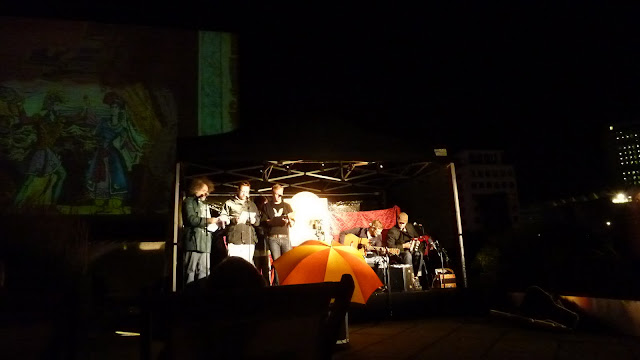 Matthew Isaac Cohen kindly shared his experience yesterday of attending the final performance of Horatio Blood's Cutouts on Concrete. The month-long event consisted of three productions, all performed at the National Theatre, by the British Stage in Miniature1 (BSiM)

Matthew had this to say:


Horatio's outsized Corinthian stage was lit by strong lights from in front (with the glare shielded partially by an umbrella) and a video camera set up right in front. Details of the set and figures (mounted on wooden sliders) magnified brilliantly on to the tower. The core audience (made up of toy theatre followers and the curious) sat on deck chairs on the second floor mezanine and was in good humour throughout this short performance (about 30-40 minutes). We responded ably to the play's rousing patriotism...the play provided a variety of contrasting scenes and effects - a battle at seas, sword fights, the appearance of a ghost, songs and memorable speeches.

1 - I can't recommend the essay at this link high enough - an insightful, delightful essay not just on this event, but with insights on toy theatre period. I get a kick out of the references to William West's sketch artists and his quick printing of current theatre productions of the time, as the 'pirate DVDs' of the 19th century, for instance!
No comments:
Email ThisBlogThis!Share to TwitterShare to FacebookShare to Pinterest
Labels: adaption, creativity, design, performance, performers, theatre, toy theatre


A new film by Yvette Edery, it employs toy theatre as one of the techniques or performance methods to tell its story. I've only seen this trailer but I am very excited to see the entire film - it looks very creative and engaging!
No comments:
Email ThisBlogThis!Share to TwitterShare to FacebookShare to Pinterest
Labels: creativity, film, imagination, performance, technology, toy theatre

Then he did a strange thing. Leo saw him take a small twist of paper from his waistcoat pocket, unfold it, and scrutinise the contents. ‘Have you seen this before Leo?’ He held out the scrap of paper. There, glowing brightly, was a tiny sliver of blue rock.

Leo peered into the paper. ‘No, never seen anything that colour.’

Mr Pollock shook his head. ‘I got this last night from a friend of mine. He was telling me some strange nonsense about … ‘ The man put his hand on Leo’s shoulder. ‘I was wondering if you might be linked to it … you seem … so different to my usual boys. As though you don’t belong here.’

Leo put his finger to touch the blue rock, and as he did so, Benjamin Pollock shimmered before him in the growing darkness, his voice echoing ‘Don’t, don’t’, while Leo’s insides somersaulted, and he was tossed through a hot whirlwind to land on his duvet in his room, staring up at the red Chinese paper lampshade which was twisting crazily above his bed.

- From Leo's Heroes, by Mo Heard

As many readers know, there is an amazing shop in London called Pollock's Toy Shop, run by Peter Baldwin, ably assisted by Louise Heard.

Louise's mum, Mo Heard, has recently contacted me about a wonderful new book she has written. Toy Theatre is featured prominently in the book in a most creative manner, involving time travel. Shades of Doctor Who, anyone? I like what I've seen and heard so far!

Let me share a bit of what Mo has told me:


I'd like to tell you about my new children's book, Leo's Heroes, which features a time-traveling boy who meets real people from the past. In the first chapter he's whizzed to Benjamin Pollock's shop, and then later Mr. P gives him a show.

The whole story will gradually unfold on my children's blog (the outline of the Pollock story is up there already), and my own blog describes how I had the idea for the book.

There were two Victorian men - mudlarks - who duped the antiques world with their fakes of medieval medallions, (they were called 'Billys and Charleys') and I have Leo actually giving them the idea when he's zoomed back to the poverty-stricken East End!

The framework of how Mo is telling Leo's tales reminds me of the television series several years ago called The Young Indiana Jones Chronicles.  In that series, director Steven Spielberg - using his famous film character Indiana as a little boy and young man - told stories of famous events and featuring famous people from history. I adored that series and the premise it used - pure genius I thought.

I think Mo is onto something using the same premise in her new book, and I'm delighted it features toy theatre in that premise. It’s a fun and creative way to get kids involved and excited (and learn) about history. As an avid local historian, and history fan in general, I’m all for it! 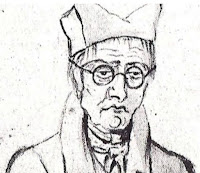 A friend of this blog - and to toy theatre in general - Steve Arnott, has entered his documentary "A Small History of Toy Theatre" in this year's Strabourg Film Festival.

This Weekend: Toy Theatre in Massachusetts 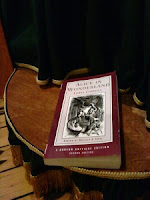 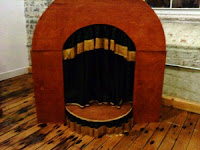 Although North Adams, Massachusetts is the 'least populated city in the state', it nonetheless boasts the largest contemporary art museum in the United States - quite a coup (it pleases me somehow to know this...!)

Alice in Wonderland will be performed this weekend there at the Main Street Stage. Tickets are a low $7, and the performance is described as lasting approximately 40 minutes. Sounds like quite the show - I'd go if I could! Anyone on the East coast, and can make it, let us know how the show goes? 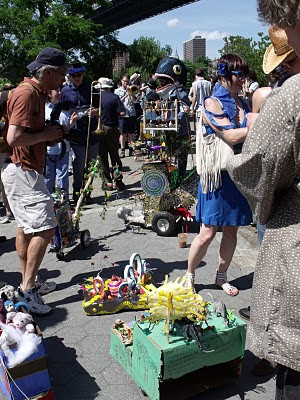 As readers of this blog know, we were treated to on-the-spot reporting of the recent 9th International Great Small Works Toy Theatre Festival, brought to us by our fearless volunteer Tess Elliott. Tess did an amazing job with sharing images and descriptions, making the festival come alive to those of us unable to attend in person.

I revisit the festival today only to share a wonderful find on another blog, by a writer who attended and got some great shots of the toy theatre parade, especially the floats. Talk about fun - floats on a miniature scale, walked along by 'giant' humans...I love it!
2 comments:
Email ThisBlogThis!Share to TwitterShare to FacebookShare to Pinterest
Labels: creativity, festival, miniature, performance, toy theatre
Newer Posts Older Posts Home
Subscribe to: Posts (Atom)