I'd love to see this - public performance of toy theatre to the masses, projected large. Great idea, great event!


...Nobody's going to look ashamed of them at the National Theatre in August, when the British Stage in Miniature – that's Horatio Blood, showman and scholar of popular arts, and his unlikely company – puts on three melodramas. I'm one of that company, having long ago met Blood, pasteboard's Diaghilev, in a cellar (it should have been a dungeon) over tea and stacks of scenery. He presents the visuals on his glowing Corinthian stage, and they're simultaneously projected to vast dimensions on the theatre's fly-tower – period Pixar, before your very eyes, with live music. The words will be as serious as they were when fresh.


From Nigel Peever comes this news:


Since completing the fully animated toy theatre production of The Corsican Brothers last year I've been trying to animate The Battle of Waterloo, The Corsican Brothers is usually available to buy on ebay and you can find a few clips here in my videos as a taster to the full 37 minute version.

The Battle of Waterloo will follow the original script again and is currently up to about 22 minutes in length, so still a long way to go! Each day of rendering produces just a few seconds of video.

I've found a site that offers a great deal of royalty free music, so this is almost a test to see if I get nobbled by youtube for using this music after all :-) 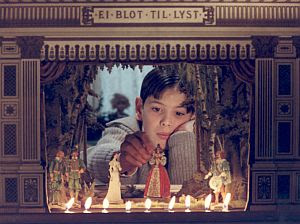 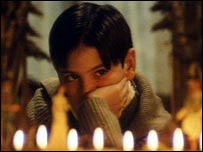 From FANNY AND ALEXANDER (Bergman)
No comments:
Email ThisBlogThis!Share to TwitterShare to FacebookShare to Pinterest
Labels: film, media, toy theatre Thanks to a heads-up by a fellow toy theatre enthusiast on the toy theatre group, I became aware of a Bay area blog that has posted some opening night photos and commentary on the recently-opened-and-ongoing toy theatre exhibition at the Museum of Performance & Design in San Francisco...
No comments:
Email ThisBlogThis!Share to TwitterShare to FacebookShare to Pinterest
Labels: creativity, design, exhibition, theatre history, toy theatre "A Walk in the City"
Originally uploaded by alankin

Everything old is new again, they say.

Well, in the case of toy theatre, at least in some circles, that appears to be true.

At the upcoming NACL 10th Annual Catskill Festival of New Theatre, toy theatre will be featured, and that my friends, is a good thing!

Great Small Works will be performing there on Saturday, July 24th. Their performances are described in the playbill as "...a summer smorgasbord of Papier Teatre and Banklsang1 including "A Walk in the City" inspired by the work of Italo Calvino, directed by Roberto Rossi, a new installment of the surreal news serial, “The Toy Theater of Terror As Usual” and [a cantastoria called] "The History of Oil", with paintings by Janie Geiser."

The festival runs from July 23 to August 1 in Highland Lake, NY

1 - Banklsang, a traditional form of theatre where a singer stood on a bench beside a giant painting and sang current events to the largely illiterate people.
No comments:
Email ThisBlogThis!Share to TwitterShare to FacebookShare to Pinterest
Labels: art, creativity, events, festival, history, performance, performers, theatre, toy theatre

On the Toy Theatre group today, toy theatre enthusiast Sean Sharp had this to share:

This last Tuesday night, we had a grand opening for the toy theatre exhibit (Toy Theatres: Worlds in Miniature) at San Francisco's Museum of Performance & Design, starting at 6:30.

Catered food and wine, a short presentation by Brad Rosenstein, Curator of Exhibitions & Programs, and William Eddelman, the chief curator for the exhibit, were followed by a 10-minute DVD of clips from various movies about or including toy theatres. 130 people showed up and all enjoyed themselves. The exhibit looks gorgeous, 21 theatres, many framed TT prints. We even have one interactive theatre, where you press a button to turn on the footlights. Six of my theatres are included, including the Redington and Mars, each featuring luridly colored versions of the final scenes from Hodgson's SIEGE OF TROY and Webb's MILLER AND HIS MEN. Also look for an art deco Fold-A-Way Theatre, with a patent-leather haired Prince Charming and a flapperesque Cinderella, printed in Chicago in 1932.

The exhibit is open through December and is free to the public. Soon, the Menagerie will be set lose in the UK. This fantastic creation was originally commissioned by the city of Senart outside of Paris in 2008, and has since been seen in other places such as Spain. This summer, Britain will be the lucky recipients of this chance at pure fantasy and fun!

Like the Sultan's Elephant, and La Princesse before - this amazing piece was designed by artist-cum-engineer François Delarozière and his company La Machine. Artichoke, the company sponsoring this treat in the UK, describes Delarozière as "...a modern-day Michangelo", and it's not such a stretch to say so.

He works in the large and the small, bringing wood, metal, fur, glass, and paint to life in ways that delight the eye and feed the soul. That my friends, is why art is the stuff of life, and should NOT be considered optional in educational curriculum, or in political budget funding! Life, without art, is empty...

“To build a moving object is to create a living architecture.

Movement is what makes life. In a machine, the frame is the skeleton, the jacks, pulleys and gear wheels are the muscles, and the wood trim is the skin.

It is not a question of copying or imitating nature but rather a matter of drawing inspiration from it, a matter of using its forms, tensions and movement to imagine, to create a language which will be based on the relation between the machine and the animal. But this is a complex, delicate language. The ways and means that are used so as to create a movement are both as important.

The operators’ presence, child or adult users in this case, strengthens even more this idea of life and gives an additional meaning to the machine’s movement. As a result, we have a couple made of the machine and the operator.

The machine becomes an actor and the operator plays this instrument.”

“He creates machines, machines which are both beautiful and crazy, giant animals, strange contraptions which play music, boats which sail across the land, birds from where you can have a drink in a daydream, a world which is both real and dreamlike and which invades cities for beautiful, moving and crazy celebrations.” As always, there are several pieces of juvenile drama ephemera up for sale, including this example shown here.
No comments:
Email ThisBlogThis!Share to TwitterShare to FacebookShare to Pinterest
Labels: art, ephemera, hand-colored, paper, portraits, toy theatre

This video shows what a Flannelgraph is, including a bit of a performance...
I was recently reminded of a very specific art form to the religion of my youth - the flannelgraph. During many a Sunday School, I was riveted to the stories portrayed using this technique, often begging to be allowed to change the scenery and the characters between scenes.

I then watched the above video while reminiscing, and it began to dawn on me how familiar it was in another respect - it definitely has the feel of toy theatre!

Oh sure, it's not on a three-dimensional stage, but the characters are two-dimensional, small, and they are moved around manually. The performer moving the characters gives voice as narrator and character(s). Performances are done for small audiences, closeup. Get the comparison now?!