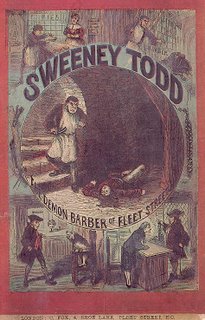 Ann Neff emailed me the other day saying she's back to work on the toy theatre for me (yayyyy!) and that got me thinking about the 'next stage' to all this - the first play I want to do in my first ever toy theatre!

I decided to solicit for interest to artists I know and appreciate, if they might be interested in taking on a small commission from me in that regard...

While I can buy such things as the scenery and actors on what are called sheets, pre-fab, either originals or reprints, but I'm more interested in a particular play that I cannot find as being adapted for the toy theatre before (I may be wrong here but I don't think so...)

I'm asking my artist friends if they would be intersted in creating the characters (actors), and background scenery for a toy theatre adaption of SWEENEY TODD.

My interest in SWEENEY TODD is a personal one in that I tend to go for the macabre, and find the story themes in the play fascinating. I'm conducting research on it right now, boning up on the supposed core true story behind the now mythologized versions we know, trying to get a handle on how it might be told in a simpler yet compelling way for the toy theatre stage. If anyone has suggestions, I'm all ears!
No comments:
Email ThisBlogThis!Share to TwitterShare to FacebookShare to Pinterest

Today starts the International Meeting of Paper Theatre, in France. It sounds like an amazing weekend coming up. Lawrence Webb will be there, as well as Peter Baldwin (Pollocks Toy Shop)...
No comments:
Email ThisBlogThis!Share to TwitterShare to FacebookShare to Pinterest 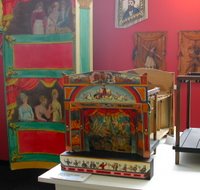 Louise from Pollock's Toy Shop sent along some additional photos of their exhibits at the Spring Decorative Arts & Textiles Fair they participated in recently. She went on to say...

It was a large space to fill for a subject that usually likes a more domestic setting but it was well received by the organisers of the fair and its visitors. It documented the history with framed pictures and prints of Benjamin Pollock and his work as well that of his contemporaries and the Victorian Toy theatre up to the present day with its revival (from the 1940s by Keen, Fawdry and Baldwin).

Among the theatres on show was a restored Skelt theatre which appe ars on the cover of George Speaights book. The display was peppered with to scale Pollocks 'furniture' taken from original scenes and complementing the furniture fair nicely.

No comments:
Email ThisBlogThis!Share to TwitterShare to FacebookShare to Pinterest 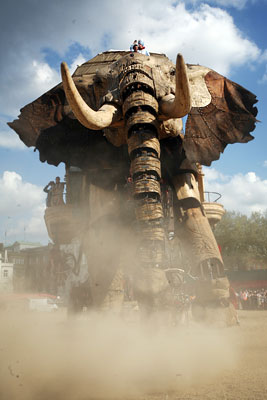 The Royal De Luxe troupe are at it again...in London!

Is it a robot? A Computer? A Puppet? It's all of those things. Myself, I rather like thinking of it in old terms, as an automaton - a very complex automaton, but one nonetheless.

The BBC says the elephant sleeps, eats, sprays water on crowds, and trumpets...

Wouldn't the Victorians have loved this!
No comments:
Email ThisBlogThis!Share to TwitterShare to FacebookShare to Pinterest
Newer Posts Older Posts Home
Subscribe to: Posts (Atom)