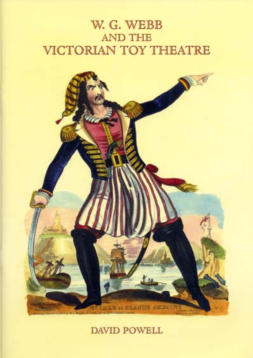 Thanks to Hugo Brown, there is a wonderful highlights page sharing all about the recent Webb Toy Theatre Festival. The festival included performances as well as an exhibition. The image in this posting is of the cover of the exhibition catalogue, which you can order online here...
1 comment:
Email ThisBlogThis!Share to TwitterShare to FacebookShare to Pinterest

'Heroes or Villains?' until November 6th

I apologize for being a bit late on sharing this, but I only found out about it tonight. Thankfully, it runs until November 6th, so if you want to take it in, and you're lucky enough to be near London, you still have a chance...

The exhibition mentioned in the article below showcases some lovely toy theatres, making (what I consider) valid comparisons between children then and now. Some things don't change!

More than a century before the arrival of ultraviolent computer games such as Grand Theft Auto, in which it's run-of-the-mill to slash bystanders with a chainsaw before grabbing a burger, British children were enjoying toys that were technologically more simple but no less bloodthirsty.

An exhibition opening today at the Museum in Docklands charmingly illustrates this point. Devoted to the vogue for toy theatres that flourished in the 1820s and '30s, the show contains 35 pristine examples, including the cardboard cut-out above.

"Toy theatres were incredibly popular with young teenagers," says curator Beverley Cook. The 2-D actors played out scenes from sensationalist plays of the period, featuring villainous folk heroes such as Dick Turpin and Blackbeard. "Children would come out of the London theatres and buy a recreation in flat form of the play they'd just seen," says Cook. "You could buy a single scene or, if you had enough money, the whole play, which might be up to 30 sheets. Often, the publishers printing these sheets were based near the theatres. It was merchandising - just as you can buy Star Wars figurines today."

This scene is the grim finale of The Corsican Brothers, adapted from a novel by Alexandre Dumas. The philandering Chteau-Renaud - you can make out his name on the strut connecting the duellists - skewers one brother with his sabre. The play was first staged in 1852, but this cut-out version didn't appear for nearly 25 years.

"Lots of these plays ended with a fight scene, a death or some kind of explosion," says Cook. "Violence was common, so the popularity of toy theatres doesn't surprise me at all. Boys have always played with swords and guns."

'Heroes or Villains?' is at the Museum in Docklands, London, until November 6.

From The Daily Telegraph, 16 July 2005.
No comments:
Email ThisBlogThis!Share to TwitterShare to FacebookShare to Pinterest

Those of you out there that have been toy theatre enthusiasts for some years, some maybe life-long, probably have similiar stories to tell as the one below. I hope you will consider sharing them with us here...

WE HAD a great toyshop at the end of our street when I was of Meccano and Plasticine age. Not that it sold either product. In fact the marvellous toyshop didn't sell toys at all, but it did stock a wide range of empty packing cases, cardboard boxes, wooden crates and suchlike grocer's debris, all of which were ours for the taking.

Thus, before they were snatched up for bonfire night, I took possession of the raw materials for a model theatre, a farm, an aerodrome, a battlefield, a village, and with the help of a little builder's sand, a seaside resort.

Nor was I the only one hard at it in Santa's cardboard workshop. Every year when the fair - or feast as we call it up there - came to town, we first of all squandered our pocket money on the dodgems and then set about constructing our own fairground out of cardboard boxes.

Roll- em- down stalls, flip-a- coin stalls, spinthe-wheel stalls (we didn't know the French for roulette) were the basic attractions. Marbles were brought into play, and the currency used was buttons snitched from workboxes or even, in desperation, clipped from school blazers and overcoats; but the principal ingredient was the humble cardboard box.

Thus when I learn from an academic outfit in Stockholm called the International Toy Research Centre that so- called educational toys are a waste of money and that children can learn just as much from playing with a cardboard box, I come out in favour of the cardboard box.

That model theatre I just mentioned was knocked up from half a dozen cornflake packets glued together, plus a strip of corrugated cardboard to form the proscenium arch.

It was, in rotation, a legitimate theatre, a music hall with cut- out crosstalk acts clipped from comic postcards, an opera house (the rights of my one-act operetta, Robin Hood, are still available) and even a military tattoo, with a cardboard Spitfire descending to the stage on a length of cotton.

And all handmade. My only concession to commercial interests was that I ran off the programmes on my John Bull printing outfit.

MY MODEL theatre (no one was allowed to call it a toy theatre) kept me enthralled until I was old enough to go to the grownup theatre. All this time I was learning my trade - or one of my trades. And not an educational toy in sight. And it all began with a cardboard box.

From "How Our Children can Box Clever", by Keith Waterhouse, Daily Mail, 29 September 2005.
No comments:
Email ThisBlogThis!Share to TwitterShare to FacebookShare to Pinterest

This post is not toy theatre-related, but it is charming nonetheless. Someone in the toy theatre world shared it with me, and I adored the website design, as well as the creativity and passion of the work these people do that the site represents.

To anyone in the UK, if you attend one of the Insect Circus Museum performances, please let me know what you think...
No comments:
Email ThisBlogThis!Share to TwitterShare to FacebookShare to Pinterest

Next week, for those of you in the eastern USA, there will be a puppet festival that includes toy theatre performance.

Sorry for the late heads-up, but I only found out about it myself!

And remember, anyone reading this that is attending the Webb Festival in the UK, please contact me - I'd love to put up some theatre and/or performance photos, and maybe some 'on-the-spot' reports...
No comments:
Email ThisBlogThis!Share to TwitterShare to FacebookShare to Pinterest

To anyone that have been part of Toy Theatre for awhile, they know the name of Gigi Sandberg. Gigi emailed the community recently to give an update on how they are after Hurricane Katrina, and a bit about their experiences during it. Gigi also has great news about where a core part of her theatre collection will be housed...safely, I might add!

This time last month Katrina was just landing with the eye of the storm going directly over our place...and this is the first time I have had access to the Internet to receive all your great messages. We don't have phone service yet and was told not to expect if before November 19th...so, of course, no internet either. So I will be answering you individually when I can get back to this machine again...when we make it back to Gulfport next time...but I do want to get out a brief message to thank you all for your concern for us. There were lots of great offers of assistance...and we are absolutely glowing over the number of invitations we got to adopt us!!!

Glen and I are fine...though a bit shaken. We "rode out the storm" in my puppet studio in Diamondhead...which is the highest point on the Mississippi Gulf Coast. The mandatory evacuation notice for Diamondhead came so late that we got the car gassed up and then looked at the map for a destination...and the storm was so huge that we really couldn't find a place that was any better than where we were. The whole experience was very scary...and I can't even try to describe what we have (and don't have) left on the Gulf Coast. Nor can I describe the devastation here or the UTTER incompetence of FEMA to help us. They are just now setting up an office here. So we have been very dependent on the Red Cross and the good folks around the country who brought big trucks of food and other necessary supplies...and then stayed to help us.

Both of our houses here are still standing...though the one here in Gulfport (where I am now) got a good bit more damage then the one in Diamondhead. So I am still staying in the Diamondhead house...even without a phone and internet service. I do have a cell phone which is usable...though all the circuits are often busy. Getting around is still a problem as there is so much of a mess on the roads...and many bridges etc are gone altogether...and the supply of gas is limited and very high priced. We're just glad we came thru as well as we did...there were 2 known deaths in Diamondhead and a long list of missing people.

SOOO...since we made it through Katrina...followed by Rita...(and another one now in the Bahamas) our plan to go to London on the 9th of October is still in place. We hope to see many of you puppeteers at the Webb Fest...and then we plan to visit northern Scotland. We had hoped to visit Mike Bartley in Plymouth but were unable to get on that tour. We do SO look forward to this trip...We really need it! Wish I knew just the words to tell you how important you all are to us!! We needed to hear from caring folks...and you were all there!! Lots and lots of heartfelt thanks.

Oh yes, the Toy Theatres came thru just fine...but I have decided that collecting antique paper stuff in Coastal Mississippi is insane. Plan to place most of my collection in Kansas City at Diane Houk's Puppetry Arts Institute where more people will see them anyway...and just concentrate on doing models of prominent theatres in the U.S. So far we are concentrating on the Goldenrod Showboat and Ford's Theatre in Washington D.C.

All for now...more when I get back to Gulfport next time.

Much Love,
Gigi and Glen

No comments:
Email ThisBlogThis!Share to TwitterShare to FacebookShare to Pinterest

The Preetz Paper Theater Festival recently concluded in Germany. This annual festival began in 1988, and has become the largest international toy theatre gathering in Europe, perhaps the world.

See for yourself here - amazing shots of theatres and performers...
No comments:
Email ThisBlogThis!Share to TwitterShare to FacebookShare to Pinterest
Newer Posts Older Posts Home
Subscribe to: Posts (Atom)