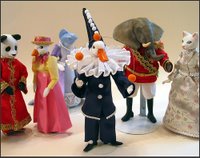 Just a few of the words that spring to the mind of anyone that discovers Tim Haugen's world.

To see more of Tim's creations, be sure to check here.
No comments:
Email ThisBlogThis!Share to TwitterShare to FacebookShare to Pinterest

An Offer One Can't Refuse...

Out of the blue, someone contacted me (recently) with this proposal...

I came across your blog from a link on the Pollack's model theater page. My father has been making scenes and figures for his model theater for the last 60 years. He has over 1500 figures, mostly Shakespearean or Shavian, some Marlowe. There are nearly 50 scenes from every Shakespeare play and a large wooden model theater, with a spinning scene area. Unfortunately I never shared his interest in this hobby and I do not really have the room to keep all of this as they have come to live with us now in their twilight years. The question I have is do you know of any person or group that would be interested in buying all or any of this?

...I think I can safely answer in the affirmative. It isn't often that a collection comes out of hiding, so to speak, but it definitely sounds intriguing! If any of you would be interested, let me know and I can put you in touch with the individual.

Dr. Who takes the stage 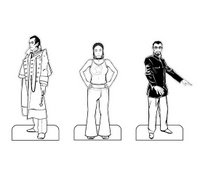 A member of the toy theatre group shared with us that the BBC has created a Dr. Who toy theatre, complete with fun instructions on how to create the theatre with a cardboard box, some braid, a paper towel tube, and a gold paper doilie.

What fun!
No comments:
Email ThisBlogThis!Share to TwitterShare to FacebookShare to Pinterest

I come across the influence of toy theatre and puppetry everywhere, even in the most modern of computer animations. Below are four images, each representing a segment of the end titles of Lemony Snicket's A Series of Unfortunate Events. Directed by James Caliri, featuring (among others) the work of lead animator Todd Hemker, it puts you under their spell as soon as the first notes of the score begin...

Click on each image, to watch the video of each segment...

2 comments:
Email ThisBlogThis!Share to TwitterShare to FacebookShare to Pinterest

Speaking of woodworking, we have been spending time on your theatre. It took George three tries, but we now have a satisfactory (i.e perfect, square, etc.) grooved floor out of solid wood. (Which can be turned over and used as a flat floor.) And new split floor pieces, and new sides and stabilizers and taller uprights. All in the interests of a "satisfactory" result, with your final modifications - the grooved floor, the grain of wheat footlight holes and the roller curtain. Basically, I have to screw everything together and shellac. Again. And build the box from sturdy cardboard.

We opted to use power tools to get everything just right this time. (I'll try almost anything.) So George, the husband, lent a hand, and we used the equipment over at the college. It was neat to learn how to use a lathe to drill the holes for the crank and screw on the roller curtain dowel dead on square. And watch how to set a great big table saw to get the saw cuts at the front of the sides on the right angle for the bent orchetra front. The orchestra and proscenium fronts did not have to be remade or adjusted at all. Which was the toughest part, to begin with.

Ann asked how I was coming along with the Sweeney, and I responded...

It's slow going on coloring the Sweeney. I have so limited time, and I must admit, I am a bit nervous never having done this before! The paper they had to use at the printer is alas not watercolor but it is very sturdy AND took the ink very well and brilliantly clear on the enlarged (130%) copies of the original sheets. I am using Prismacolor Premier colored pencils, and Prismacolor Premier watercolor pencils which you can use wet with a brush to create interesting effects (which I'll be learning how to do on the fly!)