Designer of the Small 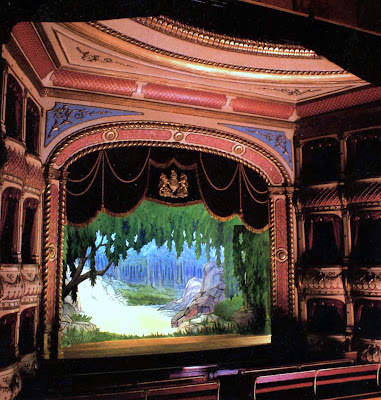 Earlier this week I heard from a gentleman named Tony Banfield. Some of you may be familiar with Tony's work, on the large or the small stage. I was thrilled to hear from him, and deeply impressed at his meticulously detailed miniature theatres he creates. Tony had this to say...

Louise Heard from Pollocks, Covent Garden, London suggested I contact you re the Victoria Model theatre which might be of interest to your readers. I have one on show at Pollocks and I've made 21 versions so far for clients in the UK, USA, Norway, Switzerland and Portugal. 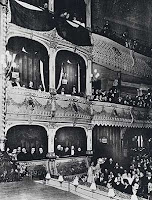 The model is based on London's Old Vic Theatre as it would have appeared in 1871 and very much how it looks now having been restored in 1982.

My first experience of theatre was aged five or so. I recall being taken to an immense building, climbing hundreds of stairs and emerging into a fantastical palace of red plush and gilt. I was hooked - a victim of the “red and gold disease”. Way below an orchestra was tuning and footlights had set the gorgeous velvet curtain aglow. When Peter Pan flew through the air it was no surprise. In such a place anything was possible.

Next day I made a theatre out of an old shoe box. In time this was replaced by a hand-me-down Pollock’s cardboard theatre where I discovered the delights of “penny plain, tuppence coloured”. Eventually I had built a rickety theatre with fly-tower, revolving stage and fan shaped auditorium. Like so many real theatres of the day I converted mine into a cinema and then I grew up....but not quite.

Years later I had become a set and costume designer and in between design jobs decided to use my set design model making skills to make the model theatre I had always dreamed of as a child. I soon found I need new skills and entered into the astonishing world of the miniaturist model maker. In nine months I had the prototype and soon found that other kindred spirits wanted it too. Since then I have made 21 versions for clients in the UK, Europe and USA. Each model is signed and dated.

All the best
Tony Banfield

Tony included the following details about this particular theatre he makes (he makes others):

This is a fully working scale model based on London's famous Old Vic Theatre as it would have appeared in 1871 and very similar to the present day restorations. The decorative auditorium is housed in one of three cabinet designs. The simple version has an open front and stage area with a framework grid to support scenery. The intermediate version is the same but has a semi enclosed stage with fly tower and flying system with around 18 bars from which to hang scenery and perform magical scene changes. The full cabinet version is enclosed like a dolls house with an exterior decorated with an architectural rendering of the 1871 theatre. Optional extras include a revolving stage, working stage trap, special front curtain based on that at the Royal Opera House, Covent Garden and a miniature lighting rig with around 150 lamps and a lap-top control board with up to 30 dimmers. This operates house lights, footlights and overhead battens in three colours and sets of spotlights. Each model is signed and dated and there are 21 versions so far in the UK, USA & Europe.

And I thought my lighting setup was complex!
1 comment:
Email ThisBlogThis!Share to TwitterShare to FacebookShare to Pinterest
Labels: collectors, miniature reproductions, toy theatre

Ilisha Helfman at Hestia House has done it again.

Ilisha has many talents as an artist, but the one I appreciate the most is her love of paper. She has created three miniature toy theatres that are exquisite in their detail and design. They would be an amazing addition to anyone's collection, and a delight as a gift to a little boy or girl this Christmas...
No comments:
Email ThisBlogThis!Share to TwitterShare to FacebookShare to Pinterest
Labels: design, paper, toy theatre

An animated classic-in-the-making, Sita Sings the Blues is heading towards the finish line. I've been watching the artist create this over the past few years, and it's been an amazing story in and of itself...
No comments:
Email ThisBlogThis!Share to TwitterShare to FacebookShare to Pinterest
Labels: animation, creativity, myths 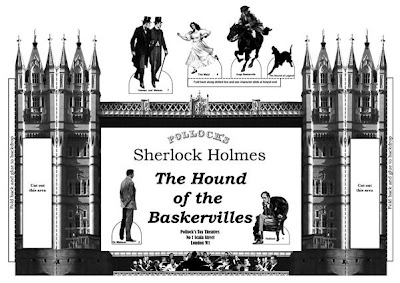 There is now a new Sherlock Holmes play available, a new adaption for the toy theatre of Sir Arthur Conan Doyle's "Hound of the Baskervilles"!

The author of the play, Steve Arnott, writes:

It can be purchased from both Pollock's of Scala Street and Benjamin Pollock's Toy Shop in Covent Garden or from myself at fenmoor_uk@yahoo.com; The price is £12 in person or £15 with postage, which is about $30 US...