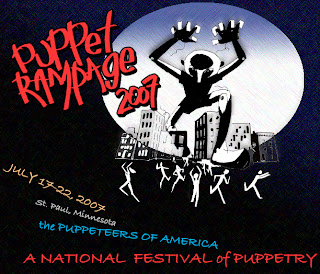 An amazing festival and it'll be right down the road from me - I had darn well better find a way to get there!


More performances than a person could take all in.

...and there will be a strong toy theatre presence.
No comments:
Email ThisBlogThis!Share to TwitterShare to FacebookShare to Pinterest 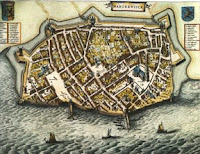 So I guess it is time for an update on the international Toy Theatre Festival in Harderwijk, The Netherlands.

Harderwijk is an old fishing town on the border of the former Suydersea. The town is almost 800 years old and the oldest part is the region called the "Vischmarktbuurt". Quaint old houses, a monumental gate which also "still" functions as a lighthouse, citywalls, an old, former, synagoque, and nice rstaurants in various price brackets.

This is the background for the first of, we hope, a long series of toy theatre festivals.

The festival will be held from Wednesday May 16 in the evening till Friday May 18 late in the afternoon. This is around Ascension Day.

What makes this festival special, are not only the guests, but the enormous enthusiasm with which the neighbourhood adopted the idea of the festival and gave it its support. 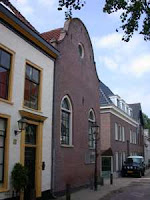 The old synagogue will be our "livingroom". Here tickets will be sold, and meals served for the performers. Other guests can drink coffee and such here but are adviced to have their meals at one of the 4 restaurants around the Vischmarkt square that will offer special festival arrangements. Two theatres will be performing on the first and second floor of the synagogue and Dirk Reimers will be selling stuff from his toy theatre shop. In the gate properly called the "Vischpoort" or "Fishgate" there will be an exhibition of theatres from the collection of the famous Ab Vissers a toy theatre collector and performer of long, international, standing. He will be selling too! For children there will be a toy theatre workshop. If you want to come and stay for a few days I can still offer some double bedrooms with breakfast in a nice hotel at the waterside for the duration of the festival at €180.

For more information, take a look at the English website...
No comments:
Email ThisBlogThis!Share to TwitterShare to FacebookShare to Pinterest 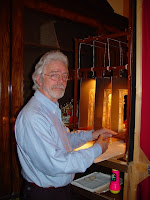 Thanks to Harry Oudekerk, I have found out about an amazing toy theatre enthusiast named Ab Vissers.

Anyone that puts a permanent toy theatre for performance in their home is alright with me!
No comments:
Email ThisBlogThis!Share to TwitterShare to FacebookShare to Pinterest

A tiny toy theater, measuring not more than 3 feet high, 2 feet wide and 18 inches deep, has been discovered at the D. W. Griffith studios at Mamaroneck, N. Y. The Purpose of the little play house reveals the infinite care observed in the preparations of the Griffith Photoplays such as "Way Down East."

Just a quick message to the main Pollocks addicts!

The new website is now up and running. It will no doubt change and grow! The plan is to add a shop and sell Hugo's and Steve's output if they wish, as well as Pollock's stuff and hopefully all things TT. I have already added a links page to Hugo and Trish and other good sites. If you have a TT links page then perhaps you might update it to point to the new site not the old one?

Steve has finished the Cinderella DVD and it's good and I hope Hugo won't mind me mentioning that he is working on a release of Waterloo to add to his other fine titles.

Believe it or not, 2 new cellars have been found under the building!! They go out right under the road in front of the shop and they are quite large and very very wet. But, they will make a good spot for me to set up a few fish tanks and bubbling apparatus to chemically treat the printing plates and remove the corrosion. Hugo may have offered to photograph / scan the results... Rumours that I will be making a TT Frankenstein down there are sheer nonsense (not enough electricity for one thing...)

The new TT clubroom at the top of the museum is coming on and all the sheets and so on are already up there. Non-TT stuff has been banished! Dolls and Bears have been seen escaping to good homes as more space for TT is found in other rooms as well. The aim is to have all the TT stuff on display in the general museum and then the the club room has space for fixing up theatres, sorting sheets and so on. It may even be used again for holding performances as that was what is was used for in the 60s.