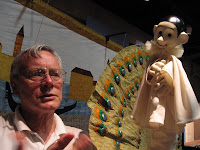 I didn't even know this was coming to where I live, but last night I had a surprising privilege to watch a performance by a great puppeteer named Luman Coad. It was the first time I saw in person a full-blown Commedia del l'Arte pantomime show.

It was called "The Harlequin's Cloak", and it included the classic stock characters of Harlequin, Columbine, Pantalone, El Capitano, and Pierrot. It was indeed very special, and he included a 'how he did it' afterwards, on some of his secrets 'behind the curtain', to the whole audience. After everyone else left, I asked if I might speak with him, and he kindly took time to visit for a bit; I learned that he has worked in television and film, and has worked all around the world, for over 40 years. It was a joy to see him work!

Here are some photos from the performance and the interview afterwards...
No comments:
Email ThisBlogThis!Share to TwitterShare to FacebookShare to Pinterest
Labels: pantomime, performers, production, puppets

Awhile back, I posted about a toy theatre invitational; click on the above image to see the results, which are simply amazing!! Obviously these are not toy theatres per se, but they are heavily influenced by classic toy theatre, and the artists have found amazingly creative ways to tell the story of Marie Antionette, the theme of the challenge...
1 comment:
Email ThisBlogThis!Share to TwitterShare to FacebookShare to Pinterest
Labels: construction, creativity, design, imagination, miniature, paper, theatre, toy theatre 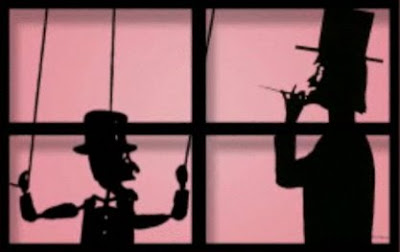 Kathe, over at Under the Poppy, writes all about her unusual book she's putting together, that prominantly features shadow puppets. Pretty cool!