The voice of O. Smith is taken by actor Peter Baldwin, well known for his many years in Coronation Street, and also a reputable collector, writer and performer of traditional toy theatre.
No comments:
Email ThisBlogThis!Share to TwitterShare to FacebookShare to Pinterest

Lucia Contreras Flores has just announced her new website - Coleccion Teatros de Papel, or Paper Theatre Collection. Currently it is only available in Spanish, but I noticed that an English version is under construction. In any event, it's an amazing website, with an impressive collection on display. I encourage you to check it out!
1 comment:
Email ThisBlogThis!Share to TwitterShare to FacebookShare to Pinterest
Labels: collectors, paper, play, theatre, theatre history, toy theatre 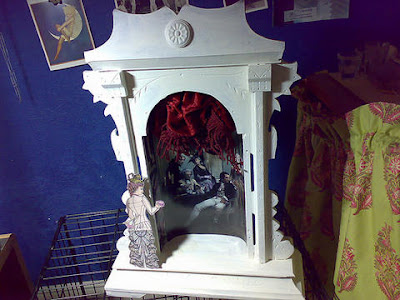 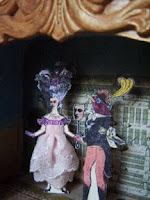 Back in January, an invitational was sent out to design toy theatres. One of the many ongoing participants has shared.

Although these designers normally do more collage than theatre design, many of them are coming along quite nicely...Bravo!
No comments:
Email ThisBlogThis!Share to TwitterShare to FacebookShare to Pinterest
Labels: construction, creativity, design, imagination, miniature, paper, theatre, toy theatre 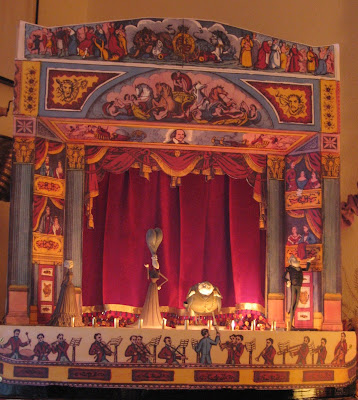 Last summer, Paul Weighell from Pollock's Toy Museum began machining his own toy theatre footlight shades. He eventually kindly offered to do the same for my theatre.

Here they are, in place. (I used a dollhouse lighting system for my wiring kit - no dimmer, very simple, but quite challenging enough for my first attempt; the bulbs were provided by Ann Neff when she built my theatre, which are 'grain of wheat' types...)

NOTE: I have traditional paper curtains on sheet metal backing to use, but also opted to have Ann include a roll-up curtain rod for which I made the red velvet curtain with beading you see here... 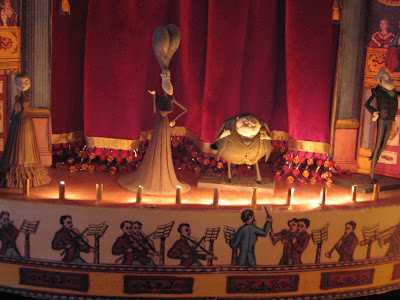