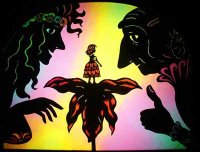 The Oregon Shadow Theatre are a wonderful group out west that produce and perform traditional and modern shadow theatre.

Check out their streaming video to see a wonderful sample of behind-the-scenes work...
No comments:
Email ThisBlogThis!Share to TwitterShare to FacebookShare to Pinterest

A Peek into a Private Toy Theatre Exhibition 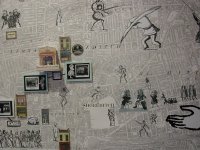 Last week I heard from Louis Heard, Pollock's Toyshop, about an exhibition they participated in...

Just thought I'd send you some photographs of our recent show in London. We were asked by Maynard Leigh, a business that uses theatre ideas in people development to show in their exhibition space over the Christmas period.

As the business was based in Leonard Street in the East End of London which is very close to where the original Pollocks toy theatre shop was and itself the address at which A.Park, a generation of toy theatre publishers were based in the mid 19th century.

This led me to do a pictorial history of the toy theatre publishers. I had to use a certain amount of artistic licence but it shows what a Londoncentric trade it was. 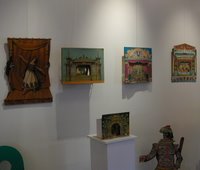 The exhibition was not open to the general public but we have been asked to do another forthcoming display at the Decorative Arts Fair in Battersea.
No comments:
Email ThisBlogThis!Share to TwitterShare to FacebookShare to Pinterest 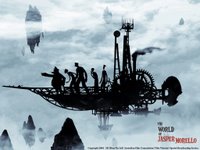 There are so many incredibly talented people in the arts today. Some of them work in areas that touch toy theatre and puppetry in abstract ways, but still owe a solid debt to those that came before them.

Such is the work of Anthony Lucas, the man behind Academy Award nominee for Best Animated Short The Mysterious Geographic Explorations of Jasper Morello.
No comments:
Email ThisBlogThis!Share to TwitterShare to FacebookShare to Pinterest
Newer Posts Older Posts Home
Subscribe to: Posts (Atom)