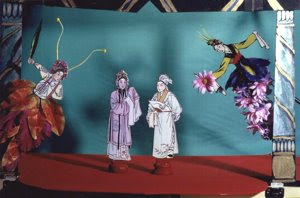 For those of you lucky enough to be in the Los Angeles area, there is a toy theatre festival coming up in June of this year...
No comments:
Email ThisBlogThis!Share to TwitterShare to FacebookShare to Pinterest
Labels: exhibition, festival, paper, performance, performers, puppets, theatre, toy theatre 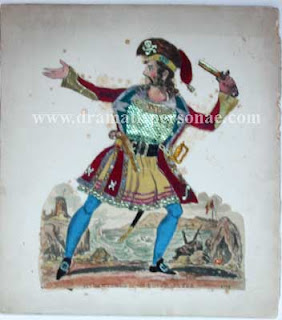 Always a great treat, these "leading international dealers in antiquarian books, ephemera, and autographs specializing in 18th- and 19th-century performing arts and popular amusements" have a great variety that will appeal to toy theatre enthusiasts.

You can mail order through them directly, or you can see them at one of these fairs coming up this spring and summer in the US and UK both...
No comments:
Email ThisBlogThis!Share to TwitterShare to FacebookShare to Pinterest
Labels: theatre history, toy theatre, toy theatre history 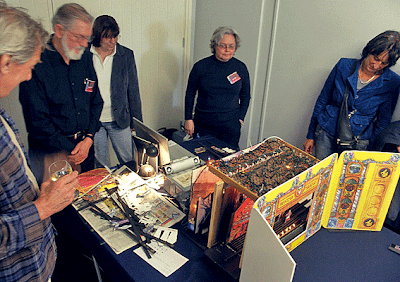 We searched all over last April to get short strings of miniature lights. Not easy. I think we ended up with 50's in red, yellow and blue. We wanted to have lights of different colors that we could dim up and down in various combinations. (George would really have loved to have his own complete theatre so he could play with lighting.) 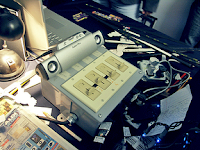 For our big size puppets, we have lots of lights and a big programmable dimmer box. But we needed something simple and transportable. So we asked our electrician to make us up a box. You can see it in the picture with Harry's small computer speaker on top. (Back home, we discovered the charge for making that simple box was over $400! I gotta get some confidence in doing simple electrical wiring.)

But we discovered that the purchased blue lights gave off too little light. So using a larger string, we set about coloring a string of white lights blue to get a "gloomy look" inside the crypt. We located some coloring designed just for that - coloring stage light bulbs. And there sat George, dipping and hanging the bulbs up on a wooden clothes rack to dry.

Voila! We looped the blue lights over the top on a wire mesh screen. And everything was fine. We did the show several times for friends. THEN, as we were packing up on a Sunday night, for the trip the following day, the blue lights just stopped working!!!!!! No fuse blown, other lights fine, circuit was okay. PANIC. I said to George, just pack it up we'll call the company in the morning and see what they say. And then I read that little white paper that comes with most Christmas lights, and it said, "Do not mount on or near metal". Aha! Our metal grid most have shorted out the string! George plugged the blue lights directly in the wall, and they WORKED. 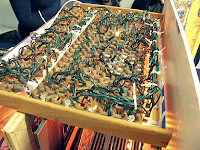 So now the problem was to find a non-metallic grid in only a couple of hours. One of our building contractors was driving us to the airport, so we called him, and he dropped off some rubber boat deck grid, which is what you see in the photo. Things were a bit tense until we set up in Holland, because we really had no idea if this would work, but thanks perhaps to the puppet gods, magic happened and we had "gloomy blue" lights from the top. (We used the plastic grids that the Christmas lights come in, cut up, to hold the series of red, yellow and white lights that go across the upper bars.)

Unfortunately, I did forget to turn up the footlights (white) on one scene, and one of the members of the audience (a toy theatre VIP) complained that the show was underlit. One has to be quite careful in toy theatre. Different folks hold on strongly to different standards. If you look at the Sennewald photos, you will see that Ted Hawkins, particularly, has oodles of regular lights in his set up.

How much light do you get out of your set-up? (Low but very atmospheric!)

I am anxious to see what your theatre looks like now! (I shall post new pics of it after I paint it - see next question...) Did you paint it black? (I'm about to...)

How exciting! Do the lights dim? (No) Or just go on and off? (Yes) Did you put lights anywhere else? (I intend to but was not sure which way I want to go...yet)

How is the glued-on proscenium holding up? (Very well indeed...) Which glue did you end up using? (I used PVC from Gamblin - it has worked amazingly well, no wrinkling, no cracking, no pealing - I highly recommend it...The Gamblin site has much to recommend about this PVC:

"Diluted with distilled water, PVA size is a contemporary size for fabric support. Conservation scientists recommend painters use neutral pH PVA size on linen and canvas instead of rabbit skin glue. PVA provides a good size layer that seals the fabric but does not re-absorb atmospheric moisture, swell and shrink like rabbit skin glue does. There are hundreds of different formulae of PVA. We acknowledge and appreciate the research of the Canadian Conservation Institute that helps painters and conservators identify the best PVA to use. Gamblin PVA Size is made from PVA that has a neutral pH and does not yellow. It also retains its flexibility and does not emit harmful volatiles.")

Have you performed or even practiced yet? (No) Do your grooves work? (Yes) Ours, out of foam core, do. Did you get the old fashioned sliders for the flat side? (I have copper rod from a welding store that will work great for making these slides...) George wants to try that for our next show.

Do you take your theatre up and down often? (not often, but I have several times and it works smooth as silk...) Is it really a bother? (not at all...)
No comments:
Email ThisBlogThis!Share to TwitterShare to FacebookShare to Pinterest
Labels: construction, design, festival, footlights, lighting, paper, performance, production, theatre, toy theatre 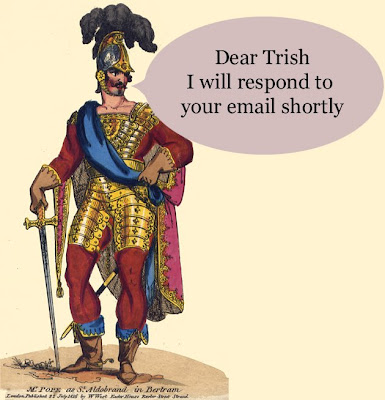 I had to smile a big one when this arrived moments ago. Such an imaginative first response from the new site's owner has definitely got me hooked!

Her followup explains a teaser of what we will eventually see... 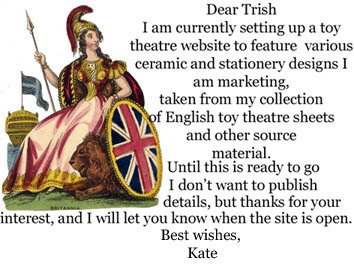 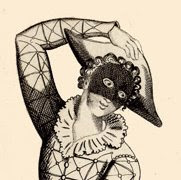 "Mr. Punch, why don't you steal the sausages?"