"All the essential morals..." 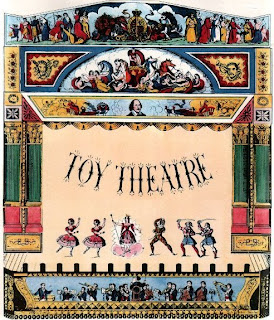 Meanwhile the philosophy of toy theatres is worth any one's consideration. All the essential morals which modern men need to learn could be deduced from this toy. Artistically considered, it reminds us of the main principle of art, the principle which is in most danger of being forgotten in our time. I mean the fact that art consists of limitation; the fact that art is limitation. Art does not consist in expanding things. Art consists of cutting things down, as I cut down with a pair of scissors my very ugly figures of St. George and the Dragon. Plato, who liked definite ideas, would like my cardboard dragon; for though the creature has few other artistic merits he is at least dragonish. The modern philosopher, who likes infinity, is quite welcome to a sheet of the plain cardboard. The most artistic thing about the theatrical art is the fact that the spectator looks at the whole thing through a window. This is true even of theatres inferior to my own; even at the Court Theatre or His Majesty's you are looking through a window; an unusually large window. But the advantage of the small theatre exactly is that you are looking through a small window. Has not every one noticed how sweet and startling any landscape looks when seen through an arch? This strong, square shape, this shutting off of everything else is not only an assistance to beauty; it is the essential of beauty. The most beautiful part of every picture is the frame.

This especially is true of the toy theatre; that, by reducing the scale of events it can introduce much larger events. Because it is small it could easily represent the earthquake in Jamaica. Because it is small it could easily represent the Day of Judgment. Exactly in so far as it is limited, so far it could play easily with falling cities or with falling stars. Meanwhile the big theatres are obliged to be economical because they are big. When we have understood this fact we shall have understood something of the reason why the world has always been first inspired by small nationalities. The vast Greek philosophy could fit easier into the small city of Athens than into the immense Empire of Persia. In the narrow streets of Florence Dante felt that there was room for Purgatory and Heaven and Hell. He would have been stifled by the British Empire. Great empires are necessarily prosaic; for it is beyond human power to act a great poem upon so great a scale. You can only represent very big ideas in very small spaces. My toy theatre is as philosophical as the drama of Athens.

One of These Days... 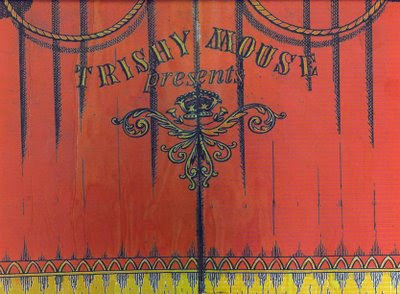 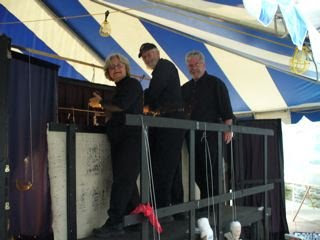 We do the "other" puppets, too. The winter and spring were spent coming up with a new script and puppets for our faux Sicilian rod marionette presentation. And we have also been developing a circus hand puppet show for outdoor fairs and such. Our last circus booking was on July 22, and we needed a rest and to get caught up somewhat on house and yard tasks. 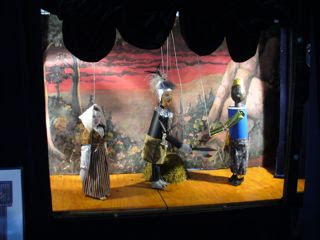 And now we have agreement to do Stephen Langdale's Nativity at our Episcopal church for a Service of Lessons and Carols the Sunday before Christmas. Jon Bankert constructed and used to perform that play. And we hope to go to Holland this coming May. So we are back in toy theatre exclusively at the moment. 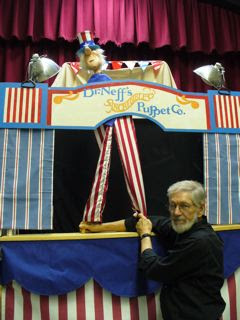 Oh, and in February, we also did a 2 week residency over a month with a nearby Quaker school. The entire third grade class researched, designed, created and performed a hand puppet show on "The Underground Railroad". That was rewarding! We did offer a toy theatre workshop at their summer camp, but it did not get enrollees.

Sounds like they've been quite busy. It's folks like the Neffs that carry the torch and help expose new generations to the wonders of puppetry, particularly toy theatre...
No comments:
Email ThisBlogThis!Share to TwitterShare to FacebookShare to Pinterest
Labels: construction, creativity, design, Marionettes Puppets, performance, performers, production, puppets, toy theatre

Fraggle Rock: Behind the scenes 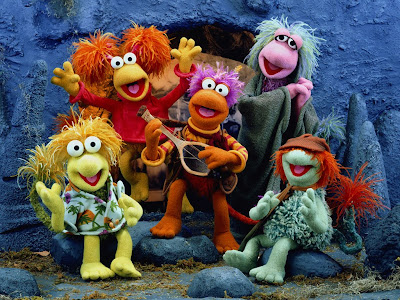 Thanks to Puppet Buzz, here are amazing 'behind-the-scenes' vids about one of my all-time favorite shows, Fraggle Rock!
No comments:
Email ThisBlogThis!Share to TwitterShare to FacebookShare to Pinterest
Labels: construction, creativity, humor, humour, media, puppets 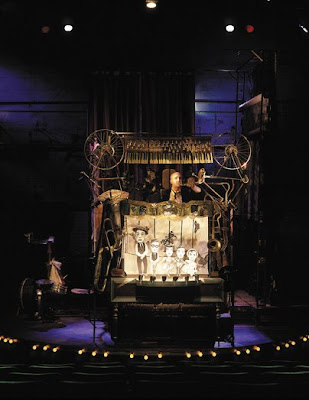 If you are lucky enough to be in Chicago this week, there is an amazing show being presented there at the DCA Theater...
No comments:
Email ThisBlogThis!Share to TwitterShare to FacebookShare to Pinterest
Labels: performance, production, puppets, toy theatre

It is time once again for the semi-quarterly catalogue from Dramatis Personae. As always, there are many toy theatre related items up for sale...
No comments:
Email ThisBlogThis!Share to TwitterShare to FacebookShare to Pinterest
Labels: collectors, miniature portraits, toy theatre
Newer Posts Older Posts Home
Subscribe to: Posts (Atom)