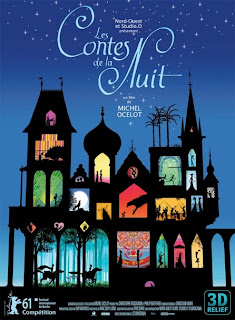 The film is presented in 3D, which "...gives Ocelot's distinctive two-dimensional look a pop-up book feel..." - or as I prefer to imagine it, a kind of toy theatre depth!
No comments:
Email ThisBlogThis!Share to TwitterShare to FacebookShare to Pinterest
Labels: animation, film, imagination, performance, puppets, toy theatre influence

Puppet Buzz posted today about a delightful series of videos that I had to pass on.  They are highly amusing and just plain fun.  Lots of hard work and love obviously went into their production, and it shows!
No comments:
Email ThisBlogThis!Share to TwitterShare to FacebookShare to Pinterest
Labels: comedy, creativity, film, humor, humour, imagination, media, performance, production, puppets


The above video shows an animated toy theatre. It's animated physically, not digitally. It's your standard paper toy theatre, but the characters and props are all jointed so in addition to sliding them around the stage, they can also be manually manipulated to perform actions.  To be more exact, "...they are string-pull puppets, working along the same principle as jumping jacks, so they can be 'remotely controlled' by a puppeteer."

The theatre is called "Vaudeville", but is also known by some as "Puppet Music-Hall", and it was created by Pete Brown.

Pete, a boat builder from Ireland, shared with me that he enjoys puppetry as a hobby, mostly large-scale for parades.  However, the idea of the music hall characters were "...just knocking around inside my head", so he felt he had to create something out of the premise.  This toy theatre design, and the book that followed, is the creative, innovative, and fun result!
No comments:
Email ThisBlogThis!Share to TwitterShare to FacebookShare to Pinterest
Labels: creativity, design, innovation, play, publication, toy theatre 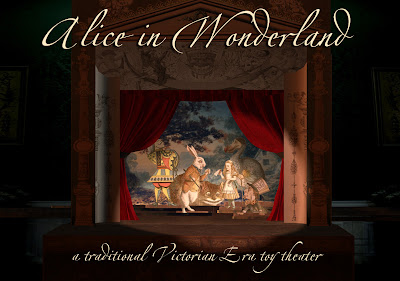 I ran across what I thought was a traditional toy theatre, but soon realized it was virtual.  "Whatever created this, is good," I thought.  I asked the website's creator to share a bit about the software used...

iClone is a 3D animation software. Up until now that sort of 3D software was expensive and slow. It took days or even weeks to build up the frames needed for a final animation. It had to place each and every pixel on the screen and work out how to bounce each and every ray of light off the scene. But iClone does all that instantly, because it uses a videogame engine and the user's PC gaming graphics-card to do all the heavy-lifting required to make a 3D animation. It's affordable too, and very usable - a lot of its content is drag-and-drop. My Alice Theater can be animated quite easily. There's a free version of iClone, iClone Ex, if people want to try it out.

I recently wrote about an exhibition that uses toy theatre in a very fun, inventive, and stimulating manner. It opened last weekend.  One of the individuals behind the exhibition, Bren O'Callaghan, wrote to share some images from the exhibition (see below) and these kind comments...

Thanks so much for getting in touch about my exhibition, apologies it has taken until now but I was consumed with the final few days of preparation and then had to take a few days off!

Please find attached two images of each theatre should you wish to use these on your site.

Thanks also for the lovely blog post, you seem to have the hang of the purpose behind the work - building upon the seed of an idea first proposed by TV comedian Harry Hill, actually the alter-ego of artist Matthew Hall. I picked up the baton of the earlier challenge so to speak, and decided to interpret Cruikshank's mammoth painting by selecting key vignettes from within the larger whole. I wanted to retain the sense of caricature and retreating fields of depth, which is why I turned to the form of toy theatres, and I glad I did because I've loved every moment of this project - even though it was hard work at times! 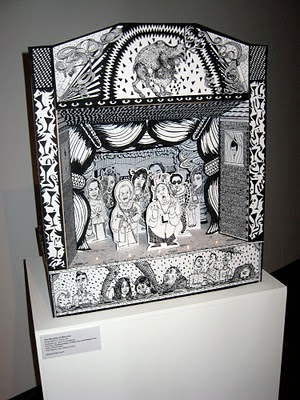 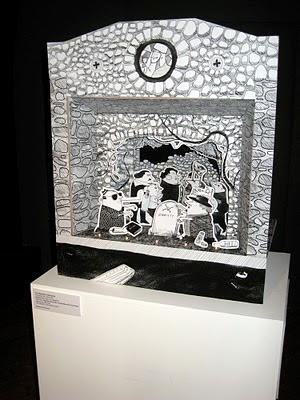 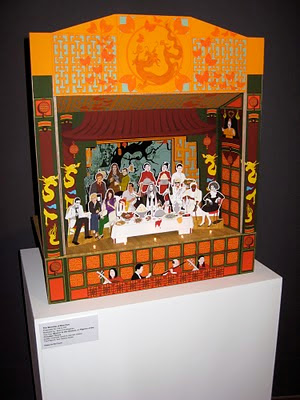 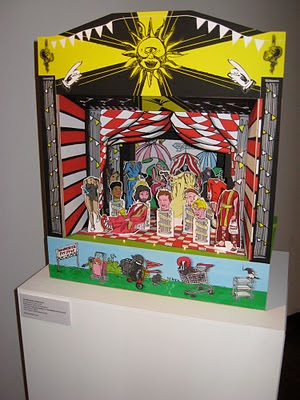 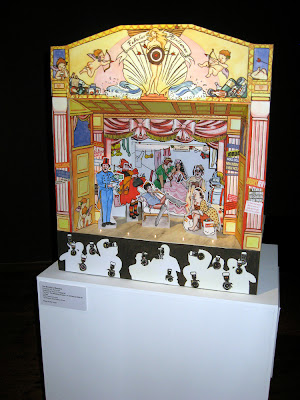 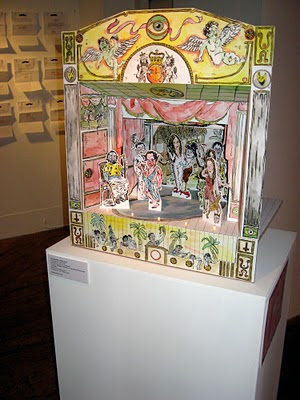 The exhibition is ongoing through February 27th.

A website devoted to the small stage has declared 2011 the bicentennial of toy theatre.

Actually there has been talk about 2011 being toy theatre's bicentennial year before.

I'm not sure how 1811 has gotten momentum as the chosen 'year one' of toy theatre; many will posit that toy theatre existed before then in one form or another, but as regards the classic form that is associated with Victorian England, I think it can be argued to have its roots in that general time frame.

The question now is, will the toy theatre community at large acknowledge this?  Will it be embraced, and used to celebrate and publicize toy theatre far and wide?  I think it would be a great opportunity to do so...
No comments:
Email ThisBlogThis!Share to TwitterShare to FacebookShare to Pinterest
Labels: celebration, events, history, toy theatre, toy theatre history
Newer Posts Older Posts Home
Subscribe to: Posts (Atom)