This past December 16, 2018, Dreamland Theater in Ypsilanti Michigan hosted its second live performance of A Star Trek Mad Lib Puppet Show on stage in downtown Ypsilanti. From pre-show to behind-the-scenes debrief, it was thoroughly delightful. [1,2]

First off, this is very much a presentation fundamentally true to the golden age of marionettes with its ties to Saline Michigan through the legacy of the late Meredith Bixby. The scale, rigging, and attention to detail have all meticulously attended to. Behind and above the stage, five human beings manipulated hand-crafted figures from rather cramped quarters, hunched about, shoulder to shoulder. [3] 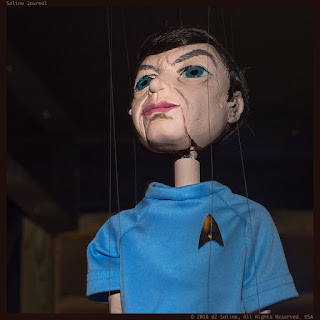 The area on which action took place couldn’t have provided a viewing space more than eight feet across, three feet high. And yet, as Bixby student Erik Grossman has regularly said in his own recollections, everything around it quickly disappears once the story starts and the audience is drawn into it. Appropriate to how the original Star Trek series was watched first-run in the 1960s, akin to a large family gathered in the living room to watch it on their home television. [4,5,6,7]
A “Mad Libs” approach was cleverly used as both warm-up and to invest audience members in the story to come. Post-show, it was revealed that significant differences in one performance versus another would come through the selection of one from among ten different music beds, for example. Backstage crew members weighed-in with real-time responses to suggestions that required some arbitration (eg, Was Warren G Harding appropriately considered a “historical figure” from the 1910s?). [8]
When the curtains then opened, it was pure, respectful Star Trek — with puppets. A solid third season episode, if influenced by Gene Coon. Rest assured, nothing like the animated installment. [9,10,11] 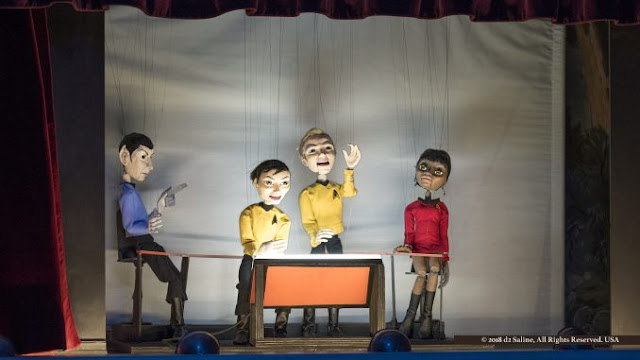 After the approximately forty-minute performance, troupe lead Naia Venturi invited all who were interested to come see their setup behind the curtain. Meticulously detailed string-puppet renditions of the five featured Enterprise crew members were suspended at the ready from ceiling hooks. Each was a work of art in its own right, without a visible hint of compromise. For this project, she’d elected to fabricate all characters in tandem.
Which was the most challenging? “Captain Kirk,” she replied without hesitation. “He just didn’t have any distinguishing features that I could call out for emphasis.” No one who heard this showed sign of agreement; the Venturi Captain Kirk marionette looked great.
Aside from the core work, there was evidence of modern technology that had been brought along side vintage puppet work. For example, a large screen hung above the curtain opening and visible only to the performers acted as teleprompter for script text. Ms Venturi additionally had a sound sampler from which she could deliver context appropriate sound effects and music beds in real time. [12,13,14]
References
No comments:
Email ThisBlogThis!Share to TwitterShare to FacebookShare to Pinterest
Labels: adaption, Marionettes Puppets, performers, puppets

From the film, The Adventures of Baron Munchausen, this is a scene showing a mechanical prop operated off-stage that provides the illusion of a sea monster 'eating' a sailing ship.  What fun!

Although this was meant in the film to be full-size, the same type of mechanisms, scaled down, would do beautifully in the toy theatre.  Hmmmm...that gives me an idea.......
No comments:
Email ThisBlogThis!Share to TwitterShare to FacebookShare to Pinterest
Labels: animation, creativity, creators, design, paper, toy theatre, toy theatre influence
Newer Posts Older Posts Home
Subscribe to: Posts (Atom)