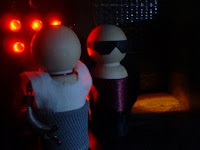 An Omaha group are going to be putting on some mighty interesting modern toy theatre productions. From what it sounds like, they are still in the rehearsal stages, but you can follow along as they progress...
No comments:
Email ThisBlogThis!Share to TwitterShare to FacebookShare to Pinterest
Labels: creativity, theatre, toy theatre 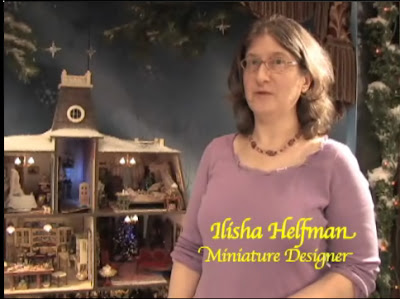 Ilisha from Hestia House sent out an email today about an exciting project she just finished.

Ilisha had this to say:

I wanted to let you know I have a dollhouse being featured on CBS for the "As the World Turns" Christmas special. The dollhouse is a key part of the script and it weaves through the episode as characters on the show imagine themselves in the rooms. The job was to make the rooms match/allude to the Victorian sets they were creating at the same time I was working. It was a crazy couple of weeks pulling it together, but I tried to include the work of many miniaturists so it could be a sort of collective offering to the full scale viewing public. There will be an article in "Miniature Collector" about my process of creating miniature settings for TV and the show is being listed on the National Miniatures Trust website.

You can see a video of the dollhouse and how it will be featured. 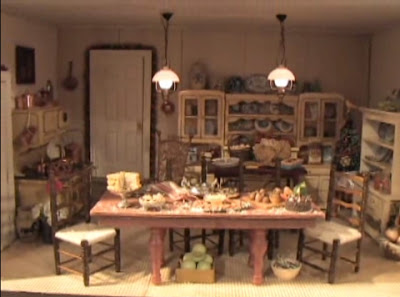 This unique and delightful animated Christmas card came my way today from Steve Arnott and his family. Please note that to see the animation, you'll need to click on the image above and open in a separate window...
No comments:
Email ThisBlogThis!Share to TwitterShare to FacebookShare to Pinterest
Labels: animation, creativity, toy theatre

A new DVD has been published by Pollocks Toy Theatres, Ltd in their toy theatre series...
A Small History of Toy Theatre
Producer Steve Arnott says that the DVD includes...

As well as rare footage of Benjamin Pollock and his family and of H J Webb making tinsel pictures. The DVD runs for 63 minutes and contains a wealth of images and firsthand accounts that bring the history of Toy Theatre alive.

He says the cost of the DVD is £10 or $20 US and shipping is £2 or $4 US. It can be ordered from Pollock's Toy Theatres Ltd one of four ways - by mail at Number 1 Scala Street, London, W1T 2HL, UK; by phone at 44 20 7636 3452 from outside the UK or 020 7636 3452 from within the UK; in person, at the Scala Street shop, for the price of £10; and with PayPal (using fenmoor_uk@yahoo.com as payee). Other DVDs in the series include, Ali Baba, Cinderella and Pollock's Museum Virtual Tour, all priced at £6.
No comments:
Email ThisBlogThis!Share to TwitterShare to FacebookShare to Pinterest
Labels: DVD, history, theatre, theatre history, toy theatre, toy theatre history 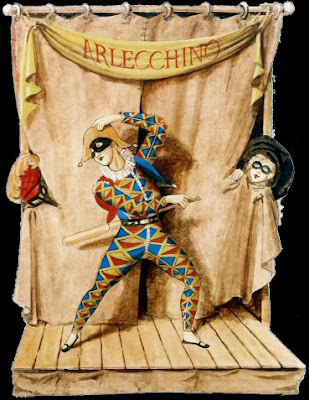 Being a novice in toy theatre, I was thinking in response to another missive from Tony I received yesterday, that an argument could be made that toy theatre sheets - specifically backgrounds - are, at their best, a form of this...

I thought your readers might also be interested in the following: Apart from making model theatres I'm also a working theatrical scene painter. Part of a scene painter's training is in the theatrical illusion of trompe l'oeil which for four hundred and fifty years dominated stage design and interior decoration. It isn't used much in theatre anymore but lives on mainly in mural painting. In reverence to this art I started painting illusionistic pictures to hang on walls or use as firescreens. The subject range is quite wide but also includes some theatrical pieces. They use the classic formula of light and shade and cast shadows along with perspective. They have cut profiled edges which helps the illusion. The source of the Harlequin and Columbine characters are the illustrations of William West who is credited with the invention of 'pennny plain. tuppence coloured'. Here, I've given them a Commedia del Arte spin which is , of course, their origin.

Tony also mentioned that he's working on a website of his own, and hopes to get it online soon; I shall post the news as soon as I hear... 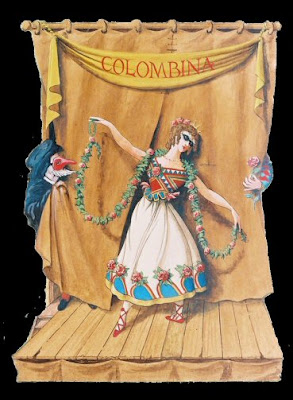