I was introduced to a magical place yesterday.  The worlds it shares takes you beyond the mundane.  It is a magical place where you forget about things like homework, jobs, or bills, and your imagination can run wild.  It calls itself  "...a studio for the imagination."

Take their website, for instance.  When you arrive, you're immersed in a virtual world of castles and ships, hot air balloons and kites, with a road full of travelers coming and going.  If you move your cursor to the left or the right, the scene moves in that direction, and you are introduced to new landscapes, peoples, and goings on.  Visitors will discover that the scenes are, in actual fact, a very clever and fun interactive menu system, featuring toy theatre-like graphics.
No comments:
Email ThisBlogThis!Share to TwitterShare to FacebookShare to Pinterest
Labels: art, creativity, imagination, paper, technology, toy theatre influence

The People You're Not Exhibition

Opening this weekend is a wonderfully satirical, creative, thought-provoking, and amusing exhibition that features toy theatre as part of its realization.

The People You're Not exhibition can be briefly described as "...a satirical trip through the private and public faces of fame, from the first heady days of idolisation and adoring fans, via rock and roll alter-egos, excess and media mockery to dysfunction, introversion and the eccentric depths of the celebrity soul."

Proposed by Harry Hill, realised by Bren O’Callaghan, the goal was to recreate George Cruikshank's THE WORSHIP OF BACCHUS using known alcoholics.

An excellent example of computer-animated toy theatre is
Nigel Peever's production of The Corsican Brothers
Recently on the Toy Theatre Yahoo Group, a member mentioned the following idea:


What does everyone think about holding an online TT festival?

It could include performances via YouTube or Vimeo, or even web cam if anyone would fancy trying something live.

There are several sites where one can hold online conferences, for presentations, abstracts and papers.

It might be easier than a physical event to start with?

I think it's a marvelous idea.  An idea whose time has not only come, but is long overdue.

Overall  response so far has been modest but enthusiastic. There was some concern about it being 'only' an online festival, with recorded performance versus live performance (albeit by video, not in-person).  However, as it was further discussed in the online group - and the original poster suggested - why not both?

Another aspect of a virtual festival beside the the recorded vs live, is that there could be virtual (animated - handmade or computer) versus 'real' or physical performances.

It goes without saying that variety is the spice of life, yet tradition is something to preserve.  That said, both traditional theatres and/or plays would be presented, but innovative, avant-garde, or experimental theatre-of-the-small should be encouraged, also.

What say you, Dear Readers?  Anyone interested in taking part?  It's early days, but the world toy theatre community would love to hear from you if you'd like to participate in any capacity - design, performance, 'backstage', technical, etc.  If you don't know who to contact, let me know and I'll put you in touch... 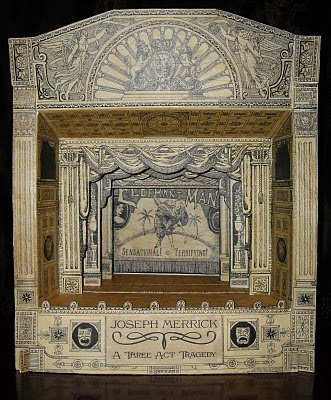 I ran across an amazing original toy theatre production about real life personality, Joseph Merrick, better known as the "Elephant Man".  Created by artist and writer Scot D. Ryersson, the detail of the the creation is amazing!