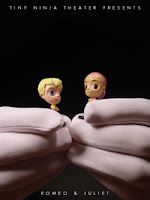 During March, the Tiny Ninja Theatre Company present toy theatre productions including a new one for children of all ages based on Treasure Island!

Here's the scoop from TNT themselves...

Since the dawn of time humanity has struggled with certain fundamental questions:
- What is the meaning of life?
- What is the sound of one hand clapping?
- If you're driving at the speed of light and you turn on the headlights, what happens?
And, most fundamentally of all:
- Who's the coolest: Ninjas or Pirates?
(We hope to answer at least one of these questions at the show!)

Best for ages 6 - 106. Older audiences may also enjoy.
Adults without children welcome too.

Then, on the very last day of March, our now-classic rendition of the Scottish Play will return to downtown Manhattan for one night only. (With hopes of future shows to come.)

GWS Does it Again...

I promised more information, and here it is...

The 8th International Toy Theatre Festival will be presented by Great Small Works May 23-June 1, 2008. It will be held at St. Ann's Warehouse in Brooklyn, New York.

It's one of the largest and most comprehensive toy theatre festivals in the world. If you have the chance to go, be sure and let us know what you think. I'd love to hear back from attendees!

"[Great Small Works has] breathed new, pointed life into the form of toy theater." - Ross Wetzsteon of The Village Voice 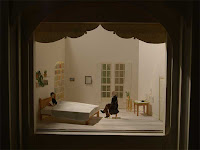 Only a few more days until an exhibition closes (with a special event - see below).

What's so fascinating about this is where the exhibition and events are being held, and how toy theatre has been used within them.

I love seeing toy theatre used in innovative and exciting ways such as this!

The Little Theatre of Disease and Desire

On Saturday the 23rd of February, between 2 and 5pm

There will be a workshop for young people, screenings of The Simbysial Case-projected in the Operating Theatre, and new shorter works, that develop the 'paper theatre' construct in different directions. 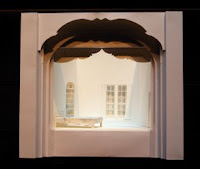 The Little Theatre of Disease and Desire is a new project by artist Daniel Baker, Artist in Residence at The Old Operating Theatre Museum and Herb Garret. The project centres on a paper model theatre, a contemporary version of the toy theatres that were popular during the 18th and early 19th Century in Europe. 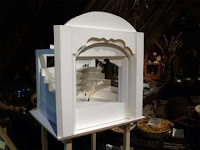 Daniel Baker’s theatre has been built to display a series of scenes from a play entitled The Simbysial Case. The story of the play is the story of a disease. The central character is The Patient, a character called The Doctor often accompanies him, and together they try to uncover the nature of the strange illness that The Patient is suffering. The narrative is a journey of discovery: a voyage of mystery and danger that never leaves The Patient’s room. On this journey he meets a cast of unusual characters such as The Two Headed Leech, The Examinator, The Tiny Surgeon, and The Flock of Bloodied Aprons.


"Once Upon a Time tells a tale of friendship, villainy, dreams, and heroism that unfolds in an elaborately crafted toy theater..."
No comments:
Email ThisBlogThis!Share to TwitterShare to FacebookShare to Pinterest
Labels: performance, performers, production, toy theatre

I was wondering the other day why toy theatre performers sometimes wear paper hats. I assumed it was a tradition of some sort, but I didn't know the details. I had a hard time of it finding the answer, but I was persistent, and finally tracked the information below down. Now, it makes perfect sense!! 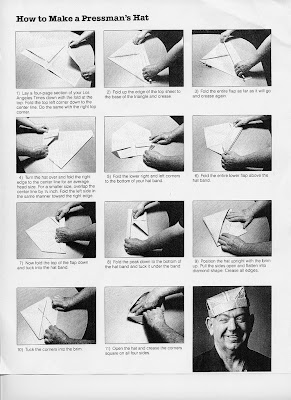 In the 19th century, square or box-like paper hats were worn in a number of trades: by carpenters and stone masons in particular, but there are references to their use in other trades, as well. Tenniel's Carpenter does in fact wear a carpenter's hat (which seems to have been folded in a different way from any printers' hat I'm familiar with: note the double diagonal creases, characteristic of the former but not the latter). - Terry Belanger, University of Virginia

"...paper hats were made and worn by carpenters, printers, and other artisans to keep sawdust etc. out of their hair..." - From The Chronicle of the Early American Industries Association, Nov/Dec 2003, PAPER HATS

Even later, they were known..."Paper hats were once as common in a pressroom as ink..."
1 comment:
Email ThisBlogThis!Share to TwitterShare to FacebookShare to Pinterest
Labels: history, paper, performers, toy theatre, toy theatre history, tradition

I discovered some really FUN (not to mention incredibly talented) artists who are using the medium of paper to make some VERY fun creations, including some that include elements of toy theatre and/or puppetry...
No comments:
Email ThisBlogThis!Share to TwitterShare to FacebookShare to Pinterest
Labels: creativity, design, paper, puppets, theatre, toy theatre 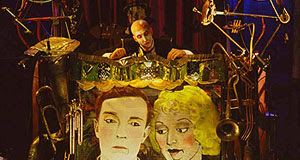 Back in 2005, I did an interview where this guy was mentioned; now I come across a mention online that he'll be performing a rare work, and it involves toy theatre in the production...

For those lucky enough to live in or near Chicago, it will be performed twice over the next week or so; see here for more information...
1 comment:
Email ThisBlogThis!Share to TwitterShare to FacebookShare to Pinterest
Labels: performance, puppets, toy theatre 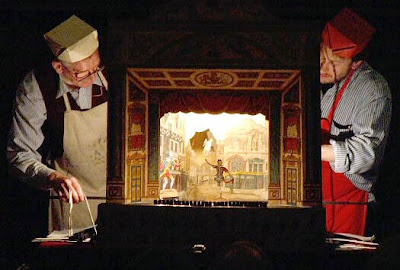 ...and speaking of Horatio Blood, here he is with Barry Clarke performing at full tilt during a December 14, 2006 event for the Society for Theatre Research.

From the Society's newsletter, it says this about that event:

A packed-to-capacity audience at the Art Workers Guild Hall in London's Queen Anne Square witnessed a full supporting cast of singers, led by MD., Oliver Davies, perform a reconstruction for toy theatre of one of the earliest British full-scale pantomimes, the 200 year-old Covent Garden production 'Harlequin and Mother Goose'.

This was the Society's first Maggie Collins Lecture and was dedicated to George Speaight, a Society Vice-President and toy theatre enthusiast who died earlier in the year.

Can anyone tell me why they are wearing those square paper hats?
No comments:
Email ThisBlogThis!Share to TwitterShare to FacebookShare to Pinterest
Labels: performance, performers, production, toy theatre
Newer Posts Older Posts Home
Subscribe to: Posts (Atom)