From last year, comes this video of a very unique, original toy theatre.

If you can make it to this year's festival (see more here) - it starts today and goes through June 13th!
1 comment:
Email ThisBlogThis!Share to TwitterShare to FacebookShare to Pinterest
Labels: construction, creativity, design, festival, humor, humour, imagination, performance, toy theatre 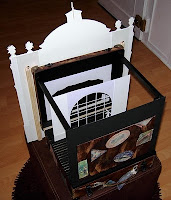 Chris says about it:

The base of the theater is just a shoe box...I just I bought the metal corners for suitcases in a general store. I project to play an old french novel "La tour des hiboux" (Owl's tower) from Gustave Aimard.

Aimard was a colorful character who ended up dieing in an asylum - an interesting choice to adapt a work of such a writer for the toy theatre stage... 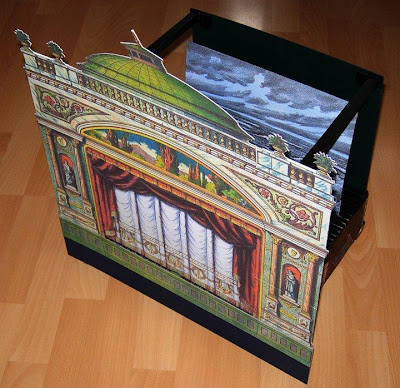 Chris sent this additional information on May 18, 2010:

About Gustave Aimard - French popular novelist who wrote adventure stories about life on the American frontier and in Mexico. He was the main 19th-century French practitioner of the western novel.

At the age of 12 Aimard went to sea as a ship’s boy and subsequently witnessed local wars and conspiracies in Turkey, the Caucasus, and South America. After taking part in the Revolution of 1848 in Paris, he traveled to North America in 1854 as part of an unsuccessful armed expedition to Sonora, Mexico... 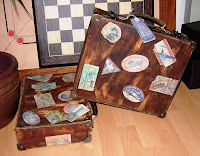 Here are pictures and commentary on its construction.

What's really cool is how Chris designed it to fold all away in the shoe box...here it is, ready to hit the road - a regular traveling roadshow! I'm hoping Chris might share with us a shot or two of a future performance in this theatre...stay tuned.
No comments:
Email ThisBlogThis!Share to TwitterShare to FacebookShare to Pinterest
Labels: construction, production, toy theatre Great Small Works' just announced the lineup for their ninth International Toy Theater Festival running May 30th to June 13th, once again being held at the magnificant St. Anne's Warehouse. The festival's subtitle is very appropriately called "A Colossal Event of Miniature Proportions!"

GSW has been slowly building one of the most world-class festivals anywhere, and it all centers around the wonderful world of toy theatre. I also appreciate that they allow for a wide interpretation within the genre, encouraging not only tradition but experimentation. There is room for both, in my humble opinion.

At front and center this year, is an installation called KAMP...

In Kamp, Holland's Hotel Modern attempts to imagine the unimaginable. An enormous scale model of Auschwitz fills the stage, brought to life by thousands of 3” tall handmade puppets enacting the greatest mass murder in history, committed in a purpose-built city. The actors move through the set like giant war reporters, filming the horrific events with miniature cameras; the audience becomes the witness. 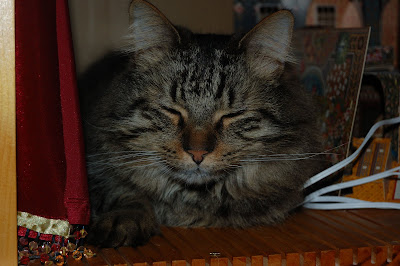 Images by Bill Reynolds
Whiskers is hanging out backstage again. He's very sleepy. He can't be bothered that it's time to change scenery... 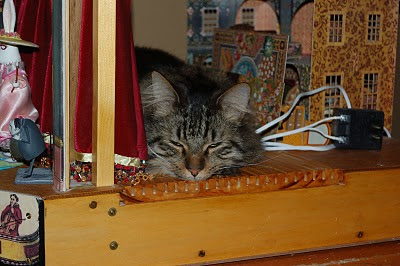 For some reason I keep thinking of him as Godzilla Kitty when I see him against this miniature perspective!
No comments:
Email ThisBlogThis!Share to TwitterShare to FacebookShare to Pinterest
Labels: humor, humour, performance, toy theatre

I love it! A traveling show that plays against a life-sized toy theatre!
No comments:
Email ThisBlogThis!Share to TwitterShare to FacebookShare to Pinterest
Labels: art, creativity, imagination, performance, performers, theatre, toy theatre, tradition 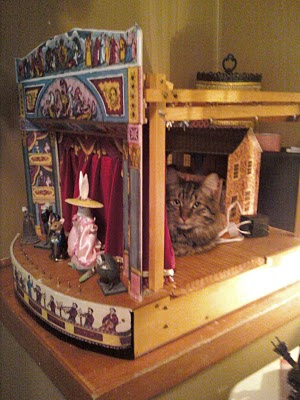 This is Whiskers. He is a Maine Coon cat. His new favorite hangout is backstage in my toy theatre.

For some reason both the Wizard of Oz (who's behind the curtain?!) and Snagglepuss ("...exit, stage left!") pop into my head.
2 comments:
Email ThisBlogThis!Share to TwitterShare to FacebookShare to Pinterest
Labels: humor, humour, performance, theatre, toy theatre
Newer Posts Older Posts Home
Subscribe to: Posts (Atom)