Moby Dick on a Stick! 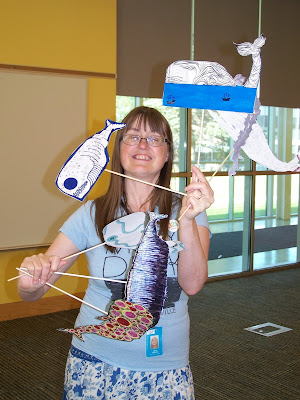 My friend Karen had an "obsession" discussion at her library (where she works as a librarian) recently, revolving around Melville's MOBY-DICK.

She used some of the art from Matt Kish's Moby-Dick in Pictures to create stick puppets for the program.

Karen led an informal discussion with the participants, in an attempt to answer questions about larger subjects. Questions contemplated were: What does the novel tell us about obsession? [Ahab’s obsessive desire to kill Moby Dick drives much of the novel’s story-line...] What methods does he use to get the crew on board with his personal obsession? And, what do those methods tell us about larger subjects, such as the nature of leadership, tyranny, and democracy?


The video below is a fascinating short film documenting Matt Kish's own obsession with Moby-Dick, and how that obsession compelled him to create a sketch, drawing, or painting every day for a year, that eventually became his book. His art inspired Karen so much, she used several for her project!