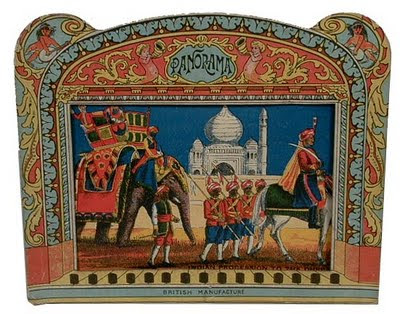 Antique Photographica is having another of its periodic sales of all things photographic and optical, including some amazing optical toys such as the panorama above. Be sure and check the sale out - it's well worth it!
1 comment:
Email ThisBlogThis!Share to TwitterShare to FacebookShare to Pinterest
Labels: Collection, collectors, ephemera, Optical Toys, paper 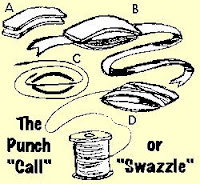 Recently I was contacted by Cindi Zuby about obtaining permission to use some photos I had taken of Luman Coad for posters of a festival taking place this next week in Edmonton, Alberta, Canada.

She had a fun story to share about when she was over in the UK and visiting with the Punch professor, Robert Styles...

I have to tell you a wonderful moment we had in London with Robert Styles (only true Punch people will get this...) He was telling us about his show that was his "audition" for being accepted as a Punchman. In the middle of the show, as he dropped Judy, he accidentally spit out his swazzle. He said there was a large amount of ad-libbing until he could reach down, pick up the now dirty and gritty swazzle and get it back in his mouth. His version is more hilarious than mine, but it made me wonder --- as all three of us were laughing hysterically in our beers --- who in the world would laugh at the phrase "...and I spit out my swazzle...", let alone know what the hell anyone was talking about!

So, you might ask, what's the latest on the Corsican Brothers production by Nigel Peever? Well wonder no more - here's a brief update from Nigel himself, via the Toy Theatre list:

I had a very pleasant afternoon with Peter Baldwin at his home yesterday recording the introduction for The Corsican Brothers, He's also very kindly recorded the judge's voice which is easy to replace in the film. Peter has also let me take photographs of the original stage productions poster to include and other goodies, like photocopying the ghost melody music etc so a cracking day.

He went on to explain he's been very busy professionally (he is an actor) so he's had to wedge in his labor of love when time permits. He has many fans (including myself) avidly awaiting the final results!
No comments:
Email ThisBlogThis!Share to TwitterShare to FacebookShare to Pinterest
Labels: DVD, performance, production, toy theatre
Newer Posts Older Posts Home
Subscribe to: Posts (Atom)